The Temple Bar in Fleet Street in 1819 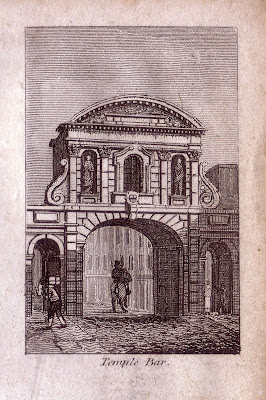 An engraving of the Temple Bar
taken from the 120 Views in
The Picture of London for 1819
being a correct guide to all the curiosities, amusements, exhibitions, public establishments, and remarkable objects in and near London
- twentieth edition -
published for Longman, Hurst, Rees, Orme & Brown,
Paternoster Row, London
and sold by all booksellers and at bars of all the principal Inns and Coffee-houses.
[Price 9 shillings, Bound]
Posted by Abbé Henri Proust at 3/28/2009 06:48:00 pm No comments:

The Temple Bar at Theobalds Park 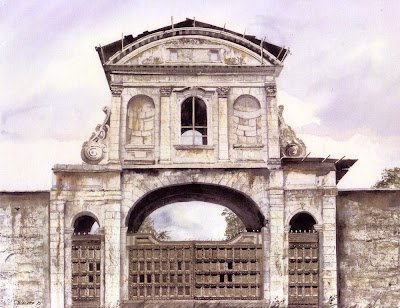 This painting shows the now-relocated Temple Bar - designed by Sir Christopher Wren - in its longtime temporary location, Theobalds Park.  The Bar, a gateway which represented the furthest extremity of the City of London to the west, was originally located at the junction of Fleet Street and the Strand.  When it was demolished in 1887 as an unacceptable obstruction to the growing traffic, it was transferred and rebuilt at this country estate between Enfield and  Cheshunt in Hertfordshire.
This painting is by Sandra Walker RI and was commissioned for the WCCA by Past Master Alan Downing.  Sandra Walker was born in America. Since moving to England in 1987, Sandra has been awarded Britain's most respected watercolour prize, the £15,000 Singer & Friedlander / Sunday Times Award for Best British Watercolour.  She was commissioned by prime minister Margaret Thatcher to paint the Houses of Parliament for the Thatcher Foundation, recently winning the Grand Prix at the late lamented Trégastel Salon International de la Peinture à l'Eau in Brittany, France.
Sandra's work is represented in numerous public and private collections, including those of Senator Edward Kennedy, John le Carré and Margaret Thatcher.  In 1999 she as elected as a member of the prestigious Royal Institute of Painters in Watercolour.
Information about the painting can be had at alandowning@architects-livery.fsnet.co.uk
Posted by Abbé Henri Proust at 3/19/2009 05:03:00 pm No comments:

Responding to the Great Debate

For those who worry about these things there is a long running debate about the relative merits of the red wines of the Old and New Worlds. In an attempt to throw some light on this matter a selection of members of the Chartered Architects' Company met with their opposite numbers from the Constructors' Company to carry out a blind tasting at the Naval Club in Mayfair. There was a competitive edge to the event with a prize of a bottle of bubbly for the outright winner.

Ten wines - 5 from each of the old and new worlds - were cunningly disguised in plain wrappers. Disconcertingly two ports or port style wines were included. Comprehensive tasting notes were thoughtfully provided for all ten plus a couple of others not on test. Some of the descriptions and names, contestants were advised, may bave been fictitious. The challenge was to match the wines with the descriptions. Easy, you might think. Not so. There was a great deal of convivial chatting to offer distraction from the job in hand and the organizer had thoughtfully provided nibbles to help soak up any potential harmful efects of the alcohol. Some had suficient salt or spice content to dull even the most discriminating palatte.

When the results were announced at the end of the evening it emerged that the Architects' team was triumphant with a Past Master Architect and a Guest/ colleague of the Master Architect identifying the most correct matches.

Then followed a drink off featuring a mystery wine. Sadly neither succeeded in identifying its parentage though both managed to notice that it was both sweet and white. The tie breaker came down to as guess about the age of the wine. This produced the winner and the Runner Up and there were two mentions in despatches - one going to the Master Architect, the other, to a member of the Constructors' team. 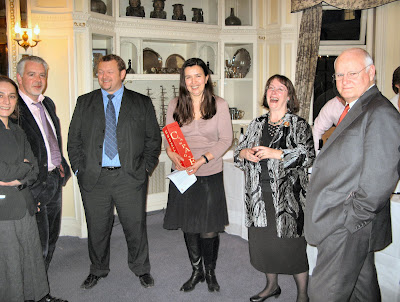 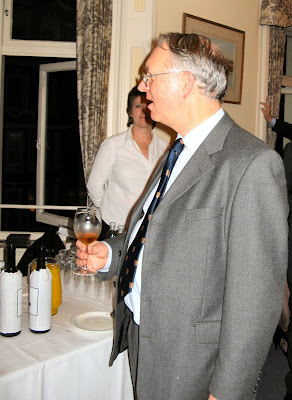 On the question as to whether the Old or New World wines were preferred or better, no decisions were reached. There may need to be a further challenge.

In the average year there are a number of events which the Master is called on or invited to attend. Many might be described as routine Livery occasions - lunches, dinners, lectures, exhibitions etc; others are far from the ordinary. Such an occasion took place on Tuesday 3 March when the Master, the Clerk and the Clerk of the Trustees were invited to attend The Solemn Consecration of the New Ring of 12 Bells at Wren's delightful St Magnus the Martyr Church situated close to the Monument.

This service has not, we were reliably informed, been carried out in London for more years than most can remember. The story goes that the previous set of 10 bells were removed from the tower in 1940 to save that from damage. This turned out to be a wise precaution in one sense. There was damage and the bells were saved. After the War they were taken to the Whitechapel Bell Foundry (from where they had presumably originated) where they sat around until 1976. At this stage someone (and no one was naming names) decided that they were not to be rehung and should be broken up, melted down and the metal re-used on some other set of bells. Given the time, this seems to the casual observer to have been an extraordinary piece of vandalism. It was also something of an own goal as various stalwarts among the loyal congregation were also broken or perhaps cut up and mounted a campaign to have bells restored to the tower.

Not content to have just 10 as before, they went for broke and commissioned 12 from the Whitechapel Foundry. We arrived to find the bells lined up in strict order of height down the nave of the church. They were suitably dressed up in what looked suspiciously like left over Christmas decorations and so placed as to impede any sensible procession of clergy, City dignitaries and Livery Masters seeking to take their seats.

The service, presided over by the Bishop of London, took some time. There were, after all, twelve bells each of which had to be washed, anointed, baptised (all were named after saints, some of obscure origin), and incensed. This last procedure involved the wafting around of considerable quantities of incense to the accompaniment of a quite delightful rendition of 'Stedman Cinques' on Handbells rung by Past Masters of the Ancient Society of College Youths (the organization to which City Bell Ringers belong). The proceedings were interwoven with some delightful singing from the choir and clergy. 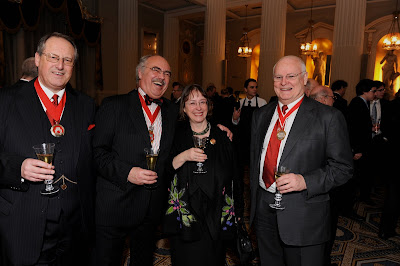 The service was followed by a reception hosted by The Lord Mayor in Mansion House and it was here that the Master, Ann Head and the two Clerks were photographed enjoying some good company. In all probability they were probably doing nothing more than expressing their relief that there had only been 12 bells!

The bells are now to be hung in the tower and will have their first outing on Easter Sunday.