With our superb guide Malek, the intrepid architects commenced an ambitious day of architectural sites. First up was a quick view of the Estacion del Norte, the north railway station, designed by architect Demetrio Ribes and engineer Enrique Gasset in 19o6, according to Viennese 'Secession' principles. The facade is a tribute to Valencian oranges; the ceramic tile mosaics are railway and travel motifs of the era, memories of the ceramic history. In the entry lobby are mosaics wishing travellers, 'Bueno viaje,' in multiple languages.

Just across the road is the Plaza de Toros, the bullring. When completed in 1860, it was the largest in Spain. Made entirely of red brick, including the arches, apart from the wooden balustrades, painted bright white. Impressively large and a lovely contrast to the railway station.
Whizzing past many of the city's memorable architectural masterpieces, including the City Hall, Post Office and Telephone Exchange in the Plaza del Ayuntamiento, all eclectic in style, as predominates in 'official' architecture, according to Malek. Tall red domes and a vertigo-inducing central clock tower are-to say the least-'inspiring.'
Many of us are now assured that Valencia is Calatrava's city, much as Barcelona is Gaudi's. Maybe?
So, with our impeccable guide, Malek, we are on a trek to the 'head of the River'...well, perhaps not precisely, but the point at which the northern course of the Turis river was diverted to the south on its way to the Mediterranean. What's there? 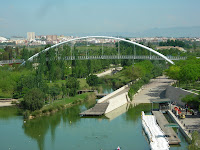 For a start there is the Parque de Cabecera, about 150K square metres of waterways, artificial hills and plenty of greenery...and a few dodgy buildings serving as the official entrance to the Zoo. Since the entrance to the Zoo is on the opposite side of the waterway from the parking, needed was a footbridge-'part of the experience', perhaps. What's the other part? Getting bit by a snake?
Needless to say, the Parque designers (Arantxa Munoz, Eduardo de Miguel and Vicente Corell) weren't best pleased about the bright white form detracting from their perfectly conceived parque, but actually I think it's fair. If only we could destroy those buildings... 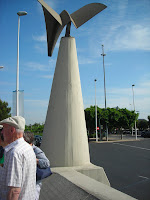 The furthest up-stream bridge, Calatrava's Puente del 9 d'Octubre-named after the date when Jaime I rescued Valencia from the Moors in 1238-isn't very impressive above ground, although some of the details are extremely well-done. 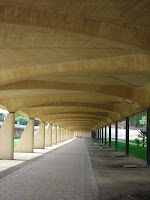 Underneath, the bridge shows the genius of Calatrava: one side open with exposed steel columns; the other with plastic concrete supports, reminiscent of Brancusi, actually.
The concrete 'bridge', exposed concrete on this under-belly, shows formwork marks and a softer, un-bleached hue.
Then there are the very sexy-if unmaintained-railings on the ramp and the plastic side walls, so obviously derived from Gaudi's forms at Casa Batllo or Casa Mila and the Parc Guell. 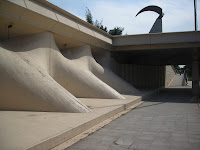 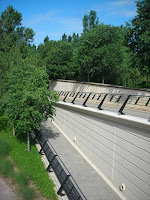 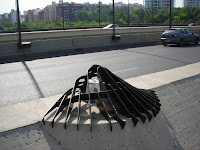 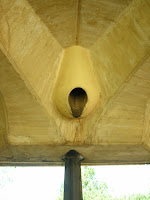 A couple of 'interesting' details here: one of the light-covers above the steel-supported side of the bridge and the other of the drainage 'drops'. Not sure the latter work very well as rainwater doesn't seem to hit the 'splash-blocks' below, so water is gradually eroding the concrete. The iconography? No comment. 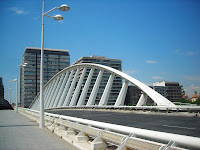 Another of Calatrava's bridges, la Puente y estacion de metro de la Exposicion, known as 'La Peineta' to the Valencians. Quintessential Calatrava, all bright-white blasted-and-bleached concrete.
Some interesting details, too, including the pyramidal shapes for the air-extracts. Promise, the kiddos on skateboards love whizzing around them! 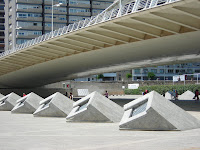 The metro station has an interesting set of skylights, although perhaps a little too dark for my preference, like the Washington DC equivalent.

But the geometry in the plaza above is really rather attractive and certainly evocative of the ceramic 'trencadis', which covers most of the walls in the metro station and quite a lot outside.
Interesting anecdote that Calatrava had to add extra supports for the glass because the kiddos' skateboards and bicycles were breaking the larger pieces of glass on a far too regular basis! Perhaps not as elegant as originally planned?