The Fate of London Bridge

The Master, Roger France, was grateful to the Rector of the Church of St Mary-at-Hill in the City for hosting not just an exhibition of all the entries submitted for the New Inhabited Bridge for London Ideas Competition but also for allowing us to stage a lecture - attended by over 100 people from the City and elsewhere given by Mark Latham pictured here with the Master - a doctoral student at the Centre of Urban Studies at the University of Leicester.

His sudies uncovered a tale of corruption, mismanagement, financial crisis and a property crash that resulted in the downfall of the Old London Bridge- the capital’s last ‘living bridge’ and provides a stark warning from history as London Mayor Boris Johnson ponders plans for a new ‘inhabited’ London Bridge – between Waterloo and Blackfriars – with luxury flats, shops and restaurants.


Mark discovered the houses built on the Old London Bridge to attract the gentry didn’t have the pulling power as expected. This combined with an economic slump and other factors to ensure that the grand vision of an inhabited bridge across the Thames was not sustainable.

“Old London Bridge is familiar to many of us in the form of the nursery rhyme “London Bridge is fallen down”, said Mr Latham, “but what is not generally known is why commerce and housing on the bridge did collapse.

“It was previously assumed by historians that the removal of the structures from the Bridge was part of a more general movement within the Corporation of London to “improve” the City via a series of infrastructure projects. However it is clear from my research that a far more complex and intriguing set of factors were at play.”

The removal of the houses and shops from Old London Bridge occurred in 1756. Mr Latham’s study has examined why.

He said: “I am fascinated by the question of why the houses were removed from the Bridge as in medieval times they were viewed as one of London’s great attractions, and the rental income from the houses on the Bridge, alongside others within the City of London, financed the maintenance of the structure.

“What I discovered was that the organisation that managed the bridge at that time was plagued with incompetent management and corruption. Both workmen and their managers charged inflated prices for materials and labour, the management left rents uncollected, and on several occasions the workmen were found to have deliberately and almost fatally damaged the Bridge in order to charge for its repair.

“Furthermore, managers often paid for improvements to their own houses out of the coffers of the Trust running the Bridge.”

Problems were compounded by a “highly risky, costly and poorly timed project” undertaken in the teeth of a credit crisis to construct a series of gentrified houses on the Bridge in the belief that such houses would prove attractive to middle class Londoners and increase the organisation’s rental income. However, the authorities had grossly miscalculated the demand for such properties and the houses attracted only a handful of tenants.

A London wide property crash ensued and soon the Trust was haemorrhaging income, the maintenance budget for the Bridge itself was being squeezed and so the vacant houses on the Bridge began to rapidly fall into a state of dangerous disrepair. London Bridge was indeed close to being “fallen down”, said Mr Latham.

“At this point reality dawned on the members of the Trust, and they faced up to the fact that it was no longer financially viable to maintain structures on the Bridge, and by the early 1755 they had begun to petition Parliament in a desperate plea for the money to fund their demolition.”

One further interesting insight from the study is that the removal of the houses and businesses from the Bridge marks a break from London’s medieval past.

Said Mr Latham: “The renovation of the Bridge in the mid eighteenth century was such an important event in the history of London as in many ways the demolition of these characterful medieval houses and the subsequent transformation of the Bridge into the type of bland utilitarian functional structure - very similar to the London Bridge we see today - represents a rupture with London’s medieval past and can be taken as symbolic of London’s emergent modernity.” 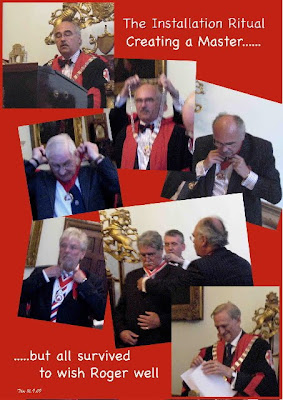 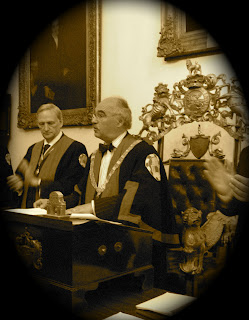 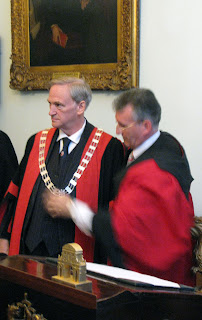 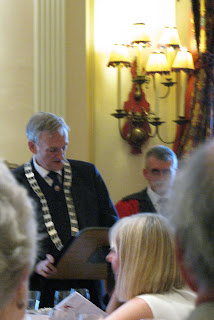 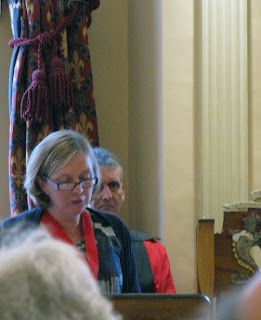 At today's Installation Court, the WCCA retiring Master, Ian Head, welcomed his successor, Master Roger France, who was installed with all due pomp.

The new madame la présidente of the RIBA, Ruth Reed, gave the keynote address at the luncheon that followed at Watermen's Hall, just south of Eastcheap at 16 St. Mary-at-Hill within the City of London.

*The King is dead. Long live the King!

p.s in reality, the retiring Master remains in good health. 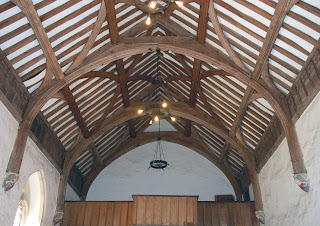 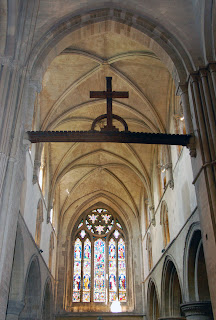 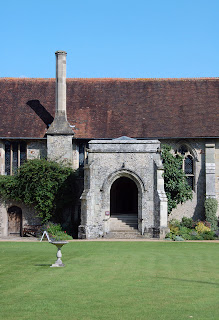 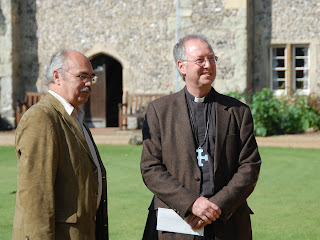 A report from Junior Warden, Michael Wilkey:
The JW joined the weekend on the Saturday with a visit to the Hospital of St Cross and Almshouse of Noble Poverty.
Founded in 1132 by Henry de Blois to care for “thirteen men, feeble and so reduced in strength that they can scarcely support themselves....”, remember this was in the time of the civil war, “... and one hundred other poor persons, as deserving as can be found shall be received at the hour of dinner”. The “Brothers” wear black (de Blois foundation) and red (Beaufort Foundation) gowns.
This has become the oldest charitable institution in Britain. The part Norman Church is all that remains of the original Hospital, built of stone from France and Dorset and flint from the local pits.
On arrival we were given the traditional Wayfarer’s Dole, bread and ale.
A very interesting tour was given by architect Michael Cardon who used to be the Trust’s appointed architect for the premises. Many interesting features were noted during the tour and he outlined many of his investigations over the years on the condition of the buildings and the defects which had to be overcome, such as beetle, underground rivers and sewage channels, damp etc.
Herewith a selection of photos: