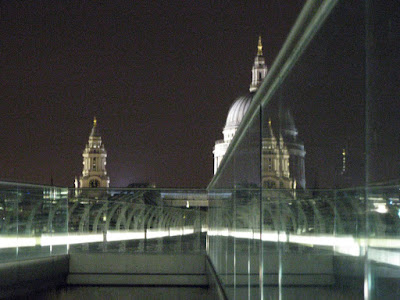 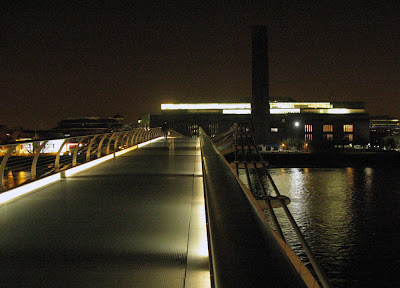 As your blog-master wends his boozy way home after the annual Livery Dinner, this year held at Draper's Hall Throgmorton Street, and after all those glasses of wine, his little camera has a bash at capturing the contemporary graphic cliché of London tourism,
the formerly wobbly bridge - big Norm's (+ Arup and Caro) 'blade of light'.
Not an anarchist in sight, although the G20 meeting demo continues only a quarter of a mile away.
Posted by Abbé Henri Proust at 4/06/2009 09:09:00 am No comments:

The winner of the New City Architecture Awards for 2008 was announced at the Company's Annual Livery Banquet held at Drapers' Hall on Wednesday 1 April. There were also two highly Commended schemes.

The Award certificates were presented by Sheriff George Gillon.

The Assessors' Report was as follows:

The jury wished to give high commendations to two projects: 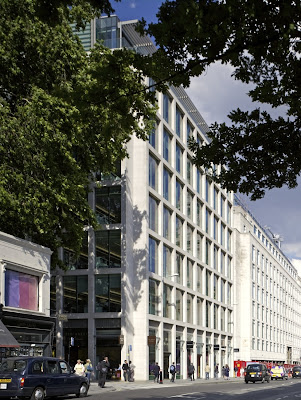 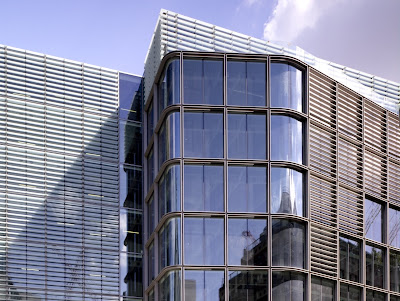 From its elevation one could scarcely have guessed at the scale of the 16,000sq m building and the welcome variation introduced by its architects to break up the large volume. On a simple stone façade reveals the office uses at upper levels, while the ground floor retail has generous volumes. The three units give animation and vibrancy to the street and contribute well to the City Corporation’s desire to make street frontages here as active as possible.

The main office entrance is on , and here the main elevation has a series of features which might appear fidgety in less skillful hands. The stone clad structure moves to steel, and louvres change from metal to glass, while curvature is introduced to give emphasis to a landscaped open space; a public route runs through the building from to .

The judges felt the architects had worked very hard to make what might have seemed a monolithic building a welcome addition to its area. They admired the way in which the composition had improved the ambiance of in particular. 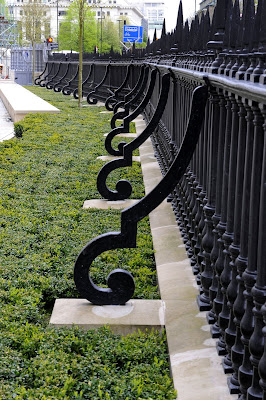 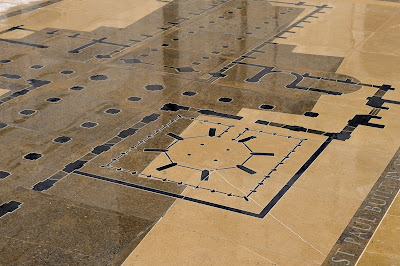 At first sight a modest piece of cleaning up around the cathedral (the site was formerly a masons’ yard), this project is a real delight. It reveals an immense amount, in a subtle way, about the original building, through a combination of excellent design and first-class workmanship.

The new layout to the South Churchyard, necessitated by the cathedral’s ongoing programme to improve access for disabled people and wheelchairs, inspired a display of the footprint of the Chapter House of the medieval cathedral much of which survived the Great Fire and is now beneath the site.

The footprint demonstrated by use of stone inserts in the paving layout and in the tops of stone walls which define grassed areas. An inlaid stone plan of the two cathedrals, by the artist Richard Kindersley, is a brilliant graphic device showing how Wren re-oriented and reduced the scale of the pre-Fire building.

The quality of work here is a real homage to the 14th century master mason of the original cathedral, William Ramsey. 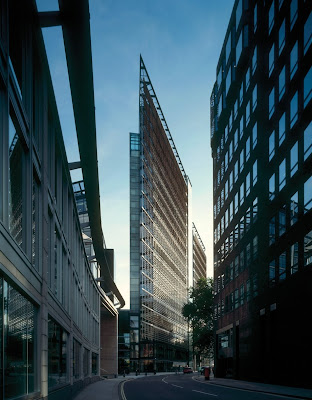 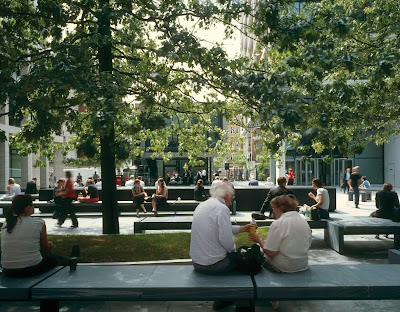 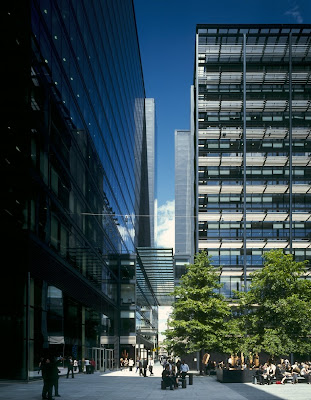 This is a very significant development (more than 100,000sq m in five buildings) on a formerly obscure backlands site off . The mixture of office, retail and public space is contained in a ‘family’ of buildings, each of which has an architectural identify of its own, but which contribute to a successful ensemble, bearing no resemblance to the dull 1960s complex it replaces.

As one would hope for in a development of this complexity, the whole is more than the sum of its many parts, which include a low-rise management block, complete with vegetation walls, as well as large commercial blocks. The retail element feels a natural part of the development rather than an imposed addition. Similarly, sculpture, lighting and artwork has been incorporated into the development to provide a sense of place, which is as evident at night as during the day.

The decision to produce a cluster of buildings surrounding public space, with typical City short routes leading in and out, has also allowed the architect the possibility of responding to different site conditions in different ways, for example by animating the Fetter Lane faced with an impressive layering of louvres.

Overall, the development provides huge added value to its area, and is a welcome addition to the City of , prompting comparison with Broadgate and . A very worthy winner. 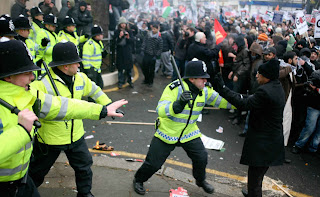 Exercising our Liberties - 1 April 2009 - The Bank of England
I suppose that someone knew well in advance that the G20 were to meet in London over the current week. What no one on the Company seemed to know when the date for the Annual Livery Banquet was set many months ago for Wednesday 1 April was that a coalition of radical groups, every anarchist in the land and a great many ordinary citizens who, for a variety of reasons had cause to take serious issue with the government of the day, and the banking community had decided that they were to descend on the City on the same day. Trouble was widely rumoured, bankers were invited to stay home or dress down and ordinary citizens were invited to stay clear of the Bank of England.
The venue of the Banquet was Drapers' Hall - not a million miles from the Bank.
There was much soul searching and careful attention was paid to the advice being given by both the City and security services. The Hall staff at Drapers' were brilliant and it was decided to go ahead with the event. The sensible compromise to amend the dress code from Evening wear to lounge suit and day dresses was taken.
The vast majority of the good sized group who attended made it to the event without so much as a sight of a demonstrator. Of those due to arrive there were a mere two 'no shows'.
A splendid evening was enjoyed by all and pictures will be added to this post when they are available. The Civic toast was responded to by Sheriff George Gillon and the toast proposed by the Master to the Guests was responded to by Artist Ben Johnson who, with the assistance of a Power Point presentation gave the audience a fascinating insight into the production of his very individual work. Much of this revolves around the representation of architecture on a grand scale. He is best known for his City Scapes. He has put together monumental works on Hong Kong, Jerusalem, Geneva and, most recently, Liverpool. The latter work was commissioned to mark Liverpool's European Year of Culture status in 2008 - the painting, measuring 16 feet x eight feet now hangs in the Hunter Gallery in that City. Interestingly, the painting was paid for by subscription. Ben is keen to tackle a similar work of the City of London to be complete in 2012. Watch this space - you heard it first here.
The toasts were followed by the Presentation of the New City Architecture Awards which were announced by the Chairman of the Assessors Paul Finch OBE. The details of the winners are set out in the post above.
All present seemed to enjoy the evening. Certainly by the time everyone left the Hall - rather later than is normal on these occasions, there was little sign that there had been trouble in the area.
The Clerk, when he called at the Hall the following day, saw a few signs of the unrest in the form of some hastily chalked up graffiti on the Princes Street wall of Sir John Soane's Bank of England building. There were samples from most of the predictable organizations. The Prime Minister and various police chiefs seemed not to be popular, there was encouragement for the Palestinians and those seeking to save the planet but, most particularly, it was those who worked in major City offices that came in for some stick. Sir Fred Goodwin would not have been flattered by some of his portraits and the artists seemed to have trouble with the spelling of the collective noun commonly used to describe those who work in or for banks. Among all the banal bits of work there was one which will live in the memory. Someone had thoughtfully written 'With all this money in the City why doesn't someone open a sandwich shop - I'm f******g starving!' Says it all really.
The grandiose interior of Draper's Hall, Throgmorton Street - 200 metres from les événements du G20.
Posted by The Clerk at 4/03/2009 04:08:00 pm No comments: