Recently back from a study trip with a group of members of the Company and a few friends and colleagues the Clerk of the Company intends to post a section of a very elementary diary of the trip on an occasional basis. He takes comfort from the knowledge that Dr Mervyn Miller will, in the fullness of time, publish an erudite trip record which will be posted on the website. The photographs are a small selection of the thousands taken by members of the group.

The Company’s annual architectural study trip took place in the latter half of April taking in Phoenix, Los Angeles and San Francisco with a few side excursions. A long time in the planning the whole thing became more expensive that originally planned due to the kamikaze behaviour of the pound in the intervening time. 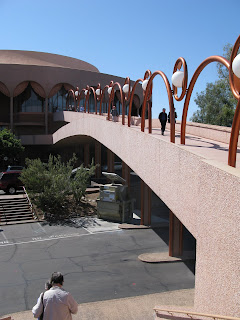 The trip began with a late afternoon arrival on Thursday 16 April at the Chaparral Suites Resort Hotel in – a suburb of . Suites – yes; resort hotel – probably not. Comfortable, well blessed with swimming pools and a nightly happy hour. The first such was quickly sampled.

17 April – The day began with a guided tour of Frank Lloyd Wright’s Grady Gammage Memorial auditorium. Designed before his death in 1959 the building was completed in 1964 after his death by Taliesin Associates led by Wesley Peters and John Rattenbury. He is thought to have derived the design from his earlier proposal for the Baghdad Opera House. Regardless of critical opinion about the worthiness of the building, it makes a distinguished addition to an otherwise uninspiring Arizona State University Campus. Sitting across the square from the building is Wes Peter’s – a neat and fitting tribute to his mentor and father in law.

We were shown this by local landscape architect James Abell who had been involved with the Antoine Predock Nelson Fine Arts Centre nearby (and illustrated below left). This was both uncomfortable and uncompromising as a building and some in the group were left with a better understanding of why architects might, just occasionally, be regarded as being arrogant. 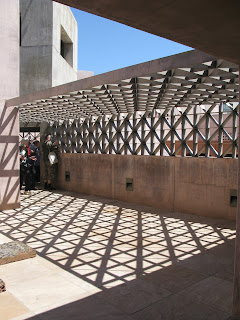 The afternoon was given largely to the work of Will Bruder who has, since 1974, worked his magic around the area. We were to learn that almost everyone had worked for or with FLW or Paolo Soleri. Will was no exception. He took us around his excellent Phoenix Central Library (1995 and still sparkling) in which most creative use has been made of materials and light. In the later context we needed to be on the top floor public space (very egalitarian this building) at precisely solar noon to witness his sleight of hand. We also visited a neatly detailed urban home community and had a stimulating hour or so in the former dance studio he has converted into his studio. We were impressed and it is hoped that the Company or the RIBA might entice him to the to give a public lecture. 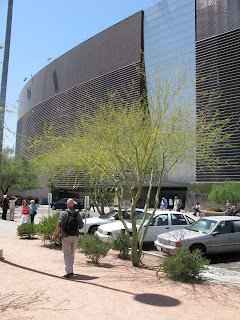 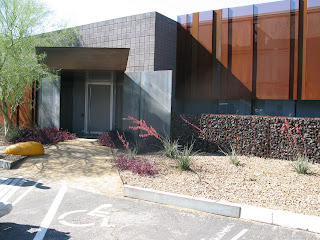 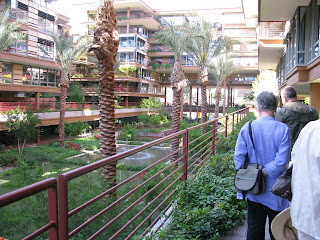 The day finished with a visit to the very classy residential development – the latest offering by architect developer David Tovey.

Very expensive condominiums (for which there’s still a market in this retirement capital of the West) with fine landscaping and good views. 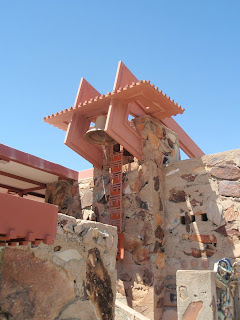 18 April – The eagerly anticipated visit to Taliesin West was, for this particular tourist, something of a disappointment. While some parts were fascinating (in both detail and execution) and there was much to excite, the total lack of a coherent master plan led to a somewhat random development with quite a lot of the structures in a state of worrying decay. One wonders with all the funds generated from merchandising the FLW brand more is not done to preserve and protect. The complex still functions as a part time school of architecture; half the academic year spent her, the rest at Taliesin East. Like many parts of the building the aging and sycophantic ex student who gave us the introduction in the theatre (far from being the best bit of the complex) was in need of sympathetic modernization. 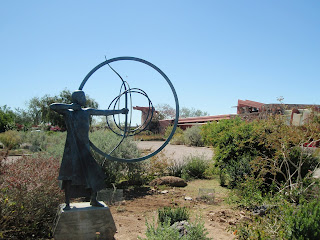 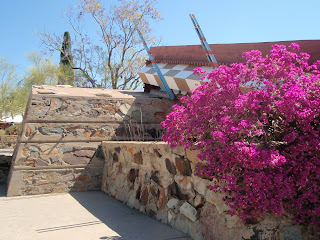 The afternoon visit to Paolo Soleri’s Cosanti premises was a bit of a relief mainly because the writer had visited the much lauded Arcosanti (shown in model form in the photo below left) en route from the Grand Canyon to meet up with the group in . It had been a desperately sad excursion to a site which seemed like a throwback to the age of flower power when the scheme first saw the light of day.

The rationale behind Arcosanti made sense in the context of the times but it seemed like an experiment which had run out of both time and funds and was not likely to recapture either youth or fortune. 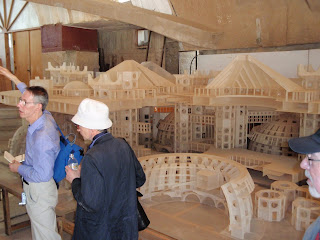 Cosanti was fun. Some of the structures were primitive, some adventurous and there were lots of bells being made. We were shown round by architect Roger Tomalty who was a real enthusiast and who was, predictably, writing a book in conjunction with Dennis Sharp. 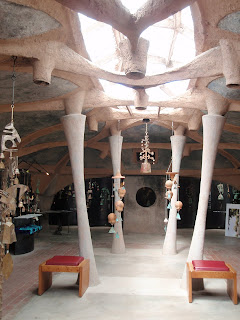 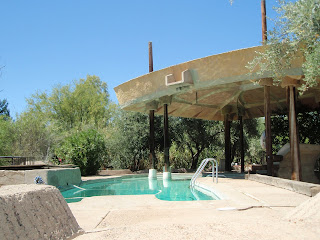 This visit was followed by visits to two sharply contrasting FLW houses. 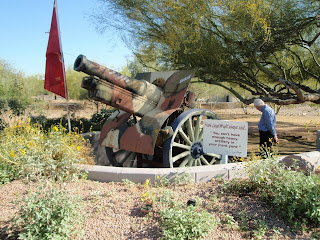 The 1951 Benjamin Adelman House – not one of his best and not improved by what seemed to me to be clumsy extensions at various times. The sign pictured on the right beside the Howitzer parked in the front drive (purported to be a quote from Wright) may have been a judgement by its author on the direction in which the gun should, perhaps, be trained!. 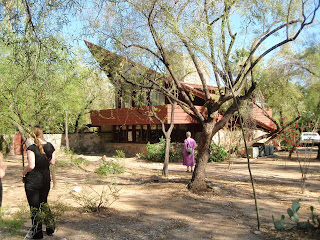 The adjacent Boomer Cottage (pictured left) dating from 1953 was a pleasure. A variation on the Usonion home theme it had, until very recently, been lived in and cared for by its original owner. One hopes that it will survive its new inhabitants. The owner’s late 50’s Packard stood proudly in the drive and also awaits a new home. 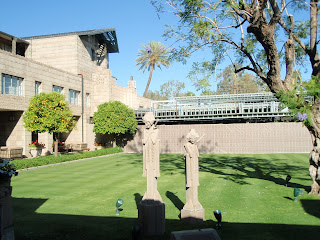 The day was rounded off with a visit to the Arizona Biltmore Hotel which was redolent with influences from Wright who played a part in the design of the building. It was interesting to see a wonderful example of FLW's art glass on display in the hotel foyer which had been donated by Oligivanna - just possibly to ensure that her husband's name would be forever linked to the original designs.

The hotel has been extended almost beyond recognition and there are many fine touches and grand rooms. Sadly the fine touches did not extend to the quality of the service in the Wright Restaurant where the group convened for dinner.

We must go down to the sea again 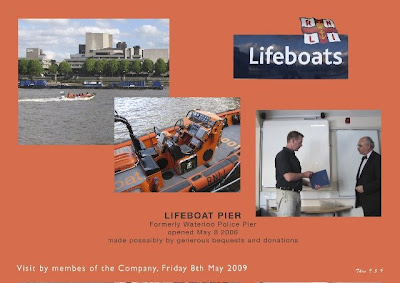 Given that the Company is seeking to reinforce its links with the Tower RNLI Lifeboat Station it was fitting that a group of members paid a visit to the station on Friday 6 May. We were given an interesting talk on the work of the Station by Wayne Bellamy standing in for Station manager Janet Kelly. Wayne is her opposite number at the Chiswick Station. He had many tales to tell and, now that the boats are equipped with cameras, there shoulod be wonderful TV footage for the future. Tom Ball has put together the attached photograph of the occasion.
Posted by The Clerk at 5/21/2009 06:18:00 pm No comments: