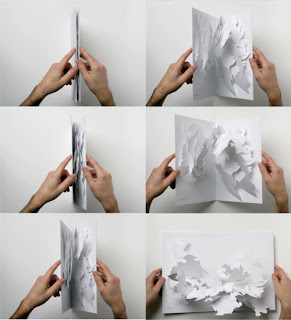 The Worshipful Company of Chartered Architects (WCCA), and the Commonwealth Association of Architects (CAA), are inviting architects and students of architecture in the Commonwealth to participate in a fun international design competition for a 3D ‘pop-up’ Diamond Jubilee card for HM The Queen. (If you Google ‘pop-up card’, there are lots of great images on the web.)

The winning card will be delivered to HM The Queen by the Worshipful Company of Chartered Architects to celebrate her (60th) Diamond Jubilee. The winner will be awarded a prize of £60.00 to cover the cost of materials, and two invitations to the Annual WCCA Livery Banquet in the City of London, at which their achievement will be recognised with a framed Certificate.

If you are interested in taking part, full details are available on the competition home page http://queensjubileecardcomp.blogspot.com/ You should register your interest by 20th March 2012, and submit you completed 3D ‘pop up’ Diamond Jubilee card entry by 20th April. 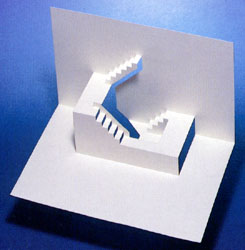 
The Company's New Year Year Court was held at Bakers' Hall yesterday - the first time the Company had visited this particular venue. The building, the fourth or fifth owned by the Company on the site was completed in 1963 after its predecessor was seen off by the Luftwaffe in 1944. Its design - both external and internal - is typical of the times. The Hall itself features some stained glass panels from the studio of John Piper which portray a graphic image of the various fires which destroyed the previous halls. 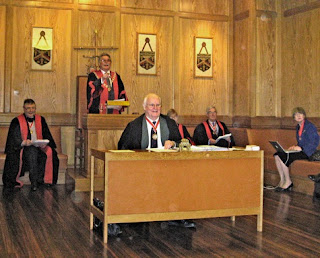 The Court Room (shown below left) followed the form of what was the accepted norm for the design of such chambers set down centuries ago. To the best knowledge of the Clerk there is only one other of this type in the City - that found in its original form in Tallow Chandlers' Hall.
This particular room was a trifle disconcerting  for both Master and Clerk with the latter sitting with his back resolutely to the Master during the entire proceedings. It might be appropriate to offer a small prize for the best bubble caption that can be applied to this photograph.
Among the more normal business of the Court, Yasmin Shariff was admitted to the Livery, and Kent Jackson - a senior Director of Skidmore Owings and Merrill's London Office and Christopher Dyson - principal in his own Spittalfields based practice - were admitted to the Freedom of the Company. 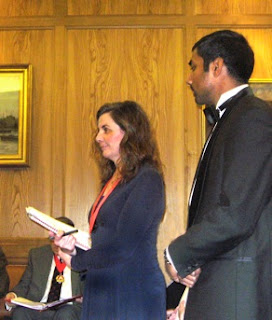 A new Student member was also admitted to the Company. Naveen Anandakumar was indentured for the period of his studentship to Chartered Architect and Citizen of London Mrs Anne Markey. The admission is based on the City of London's traditional Binding of Apprentices.
Naveen is the most recent of 17 current Apprentices / Students; all will, hopefully go on to become Freemen and Liverymen when they have satisfied their respective Part 3 examiners on completion of their studies. A number of their predecessors have already taken this step.
The culinary confusion referred to above relates to the decision that the meal should take the form of a buffet first course followed by a dessert. This was done as something of an experiment to see if the cost benefit of such an arrangement and the consequent lower ticket price would encourage greater attendance. It did - numbers were 50% up on those for the previous couple of years at this function.The jury is out on whether a significant majority approved of the arrangements. Many seemed to have done, some did not. Watch this space.
Posted by The Clerk at 1/25/2012 05:59:00 pm No comments: