Those members of the Company who joined the study trip to in 2008 wll remember being shown around what had been the British Residency. This splendid Palladian composition had been built for - and substantially to the designs of - the colourful James Achilles Kirkpatrick, who was the Resident for a few years either side of 1800. 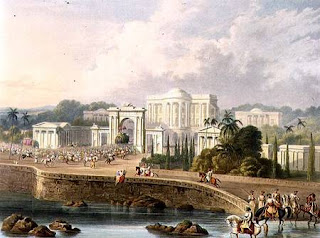 Post 1947, the buildings had suffered a number of different occupancies, each seemingly determined to do less to safeguard the architectural quality. Many of the components of the complex had simply collapsed and the principal building itself was in an advanced state of decay. At the time of our visit the building was functioning as the Osmania Women’s College. The main reception room was littered with desks, all strategically placed so as to avoid the possibility of their occupants being eliminated by falling pressed metal ceiling tiles. Their support system, having lasted from the early days of the eighteen hundreds, was no longer up to the task. The adjoining room that had, if my memory serves me right, originally been a ballroom, was equally dispiriting in that a selection of trestle tables were groaning under the weight of a vast collection of nineteenth century books - many first editions - that had once been the Residency's library collection.
Things did not get better from there. Access for visitors to the upper floor was not a possibility; the stairs were unsafe; only students were permitted access. Never let it be said that women’s education is not valued!
The good news - and, indeed, the cue of this post - is that rescue is at hand. The Spring 2010 edition of Monumentum, the quarterly journal of the World Monuments Fund, reports that a Conservation Management Plan has been adopted and, when funding is available, the Residency building will be restored to its former glory. Many of the unsatisfactory constructions which have sprung up in the extensive gardens will be removed when the renewed space is finally available again. 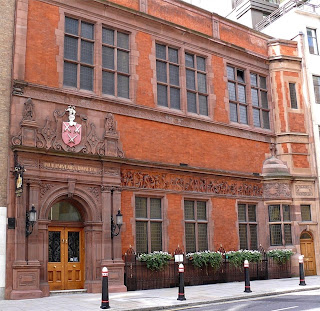 Cutlers Hall in Warwick Lane EC4 was the venue for the New Year meeting of the Court and the informal dinner which followed.
The red brick and sandstone Grade 2 Listed Cutlers’ Hall was designed in the late 16th Century manner by T. Taylor-Smith (whose sole work of note the Hall appears to be) and erected in 1888. It is the Company’s fifth hall.

While there are few records of the 13th Century hall, the 15th century Hall (‘next to the tenement belonging to the famous Richard Whityngton - sometime Mayor’) was rebuilt in 1666 only to be destroyed by the Great Fire 3 months later.
The replacement Hall showed more fortitude lasting from 1670 until compulsorily purchased by the Metropolitan Railway Company in 1882. The present Hall suffered damage from a fire bomb in 1941 but was recommissioned by 1951.

The finely carved terracotta frieze to the Warwick Street elevation was the work of Benjamin Creswick - a pupil of Ruskin. It depicts cutlers working at their craft.
66 member and guests enjoyed an excellent dinner marked by a selection of wines which were chosen to reflect the fact that 26 January is celebrated on the other side of the world as Australia Day. Guests were welcomed by the Master with the toast being responded to most engagingly by The Master of the Arbitrators' Company - Christopher Dancaster. The Senior Past Master of the Company, John Owen-Ward MBE proposed the toast to the Master and the Company.
Posted by The Clerk at 2/02/2010 06:52:00 pm No comments:

Given the vageries of the late December weather and the Clerk's almost immediate flight to even worse weather in the United States (where, at least, they have a very effective snow ploughing regime) this report has been a long time in coming. Sadly there are no photographs to illustrate the happy gathering of members of the Company and their opposite numbers from the Furniture Makers' Company at song and supper in the Church of St Mary-le-Bow and at table in the Furniture Makers' Hall in Austin Friars.

The service was unremarkable apart from the facts that the sermon was preached by the Reverend Oliver Learmont - an old friend of the Master and there were a few unusual readings. The first was an extract from a letter of Bishop Leo of Rome to Bishop Flavian dated AD449. In the times of Bishop Leo the Great there were disgreements about the correct way to state the truth that Jesus Christ is both God and man. It was this letter (known as the Tome of Leo) written to Bishop Flavian of Constantinople, in which he affirmed that Christ has two Natures in one Person. The other two were poems - one by Richard Crashaw (1613 -49), the other from Sir John Betjeman.While it is accepted that those who preside over City of London Churches are subjected to rather a lot of Carol services in the run up to Christmas and look for opportunities to introduce a bit of variety, there were some in the congregation who felt sad that the traditional readings had been dispensed with.
The supper which followed at Furniure Makers' Hall was, as usual, a convivial affair. The Architects were heavily outnumbered by Furniture Makers this time - perhaps beacuse of the wearther, perhaps the distance between church and hall or perhaps because of escalating prices. Perhaps a combinbation of all three. Watch this space.
Posted by The Clerk at 2/02/2010 06:26:00 pm No comments: