Geoffrey Purves is installed as Master 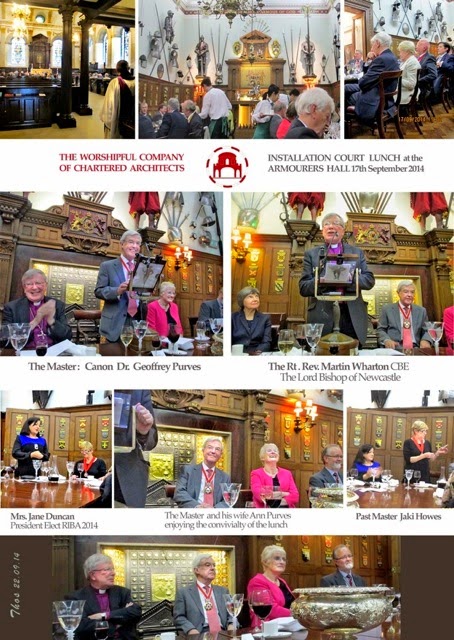 The Master's visit to the North East 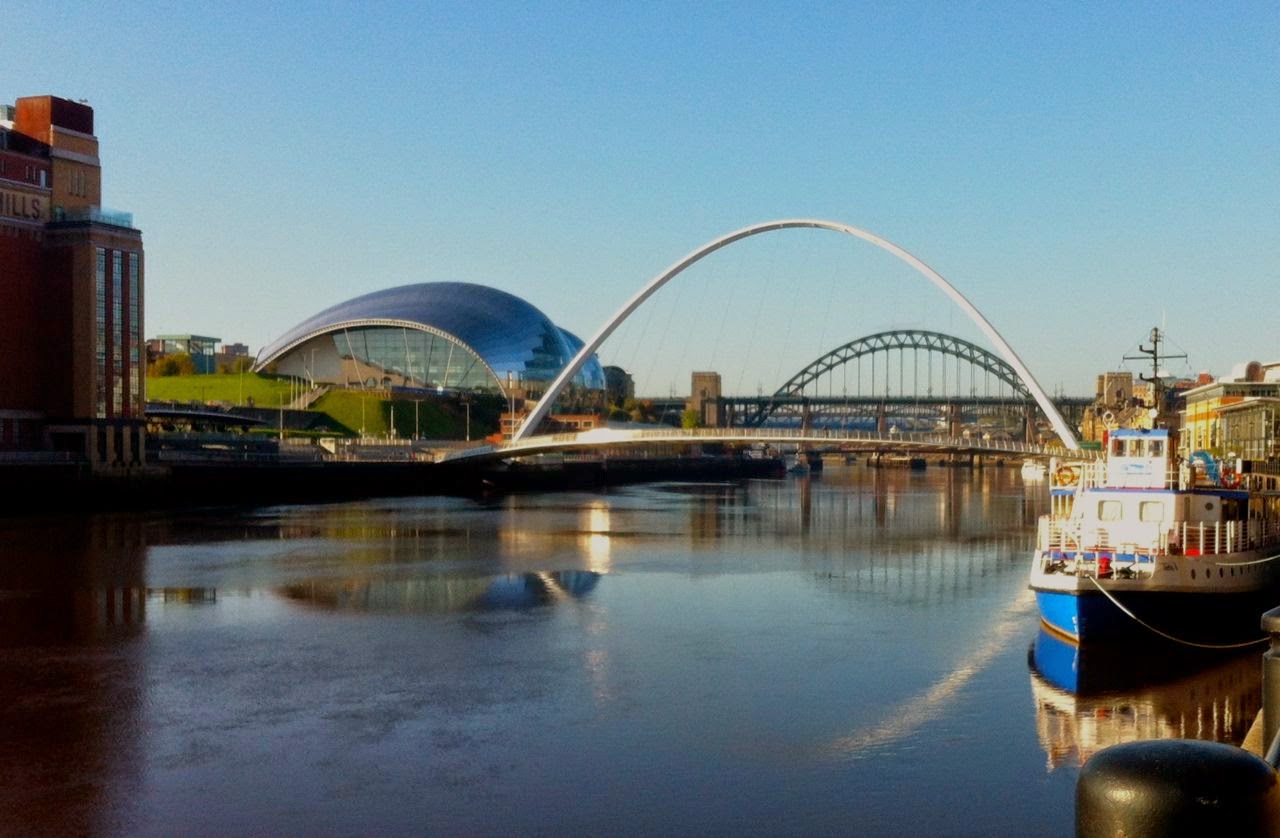 Newcastle, awash with fine buildings and dramatic infrastructure, generously extended its indian summer to embrace the Masters’ Weekend, ensuring a memorable stay in the northern city for the members of the Company who accompanied Geoffrey and Anne Purves on a tour of geordie architectural highlights.


Local conservation architect Cyril Winskill kicked the weekend off in great style, leading us around Grainger Town along the magnificent Grey Street - one of the finest enfilades of Georgian frontages in the land - through the terracotta-clad Central Arcade, the 1930s Tyneside Cinema (restored by Fletcher Priest), what’s left of Eldon Square (destroyed in the 1970s by Chapman Taylor’s huge shopping centre) and then into St. Nicolas’ Cathedral where Geoffrey is a lay Canon. Across the street is the RIBA Enterprises building where the institute runs NBS and RIBA Services. CEO Richard Waterhouse told us of his plans to buy and refurbish the whole site in order to accommodate the growing staff, boosted by RIBAE’s global BIM business.

Then on to one of the highlights of the tour - the Civic Centre designed by City Architect George Kenyon and opened in 1967. The Grade ii* building is beautifully maintained and popular to work in. It is the sort of building that restores one’s faith in the values of sound detailing, quality materials and self-effacing design with moments of exuberance (most of them involving sea horses, inspired by the city’s coat of arms). The Lord Mayor generously hosted us in the City’s Silver Gallery, despite having spent the previous night trying to get to sleep, unsuccessfully, in the Knights Park football ground in aid of the homeless.

Dinner followed with David Faulkner, an old friend of Geoffrey’s and Anne’s and a former leader of the City Council. David gave us the benefit of his political experience with an informed analysis of planning and regeneration in the city, particularly the refusal of Newcastle to house the North Music Centre, a new arts centre or share a bridge with their neighbours to the south.


As a result Gateshead now benefits from the Baltic, the Sage and the Millennium Bridge - our ports of call the next morning.

We were guided through the Baltic by director Godfrey Worsdale and enjoyed a tour of the colourful work of French artist Daniel Buren. Godfrey discussed the impact of the centre on the cultural life of the city and praised the designs by Ellis Williams - represented in our group by Rosemary Curry. We then moved on to Foster and Partners’ Sage centre next door, which delivers a splendid public space beneath its blobby shell as well as three very different performance areas - an intimate in-the-round theatre, a rehearsal space and an elegant shoe box concert hall.
Nostalgia loomed as we toured the University Campus - the alma mater of Geoffrey and Deputy Master Mervyn Miller. Mervyn was particularly delighted to find that a hefty stone capital which he and other students had placed outside the department of architecture many years earlier was still in it’s place. The campus is a bit of a zoo of buildings by the likes of Basil Spence, William Whitfield and Sheppard Robson held together by more recent public space improvements by local-boy-made-good Terry Farrell. Farrell also had a hand in the refurbishment of the Great North Museum, a project carried out in conjunction with Purves Ash as conservation architects.

After a half hour bus journey out of Newcastle through rather bland countryside, Vanbrugh’s Seaton Delaval comes as a shock. Its brooding façade stands sentinel over a commanding vista that sweeps down to the estuary of the River Blyth and the North Sea. One of the Seaton architect’s finest houses, it is currently being stabilised by the National Trust having stood as an empty ruin since the interior was destroyed by fire in 1822.

The chiaroscuro of Vanbrugh’s deep set stonework was enhanced by the autumnal sun and by the patchwork of dark staining that none of us could identity - was it pollution, the effects of the fire or was it lichen? Not even the conservation architects amongst us could provide the answer.


Before repairing chez Purves for dinner we visited Alnwick Garden created by the Duchess of Northumberland and Jacques and Peter Wirtz. Although there were many nice details, the overall strategy of Disneyfication of landscape and the overblown design of the central cascade feature seems out of context with the looming context of Alnwick Castle itself, in spite of elegant interventions by Hopkins Architects and water sculptor Bill Pye.

On Sunday I took the opportunity to revisit Ralph Erskine’s Byker Wall. While looking a little worse for wear, the estate - built between 1969 and 1982 - illustrates the importance of placemaking in creating amenable living environment. It was an appropriate end to a most enjoyable and informative weekend.

Fascinated by the restoration work on All Hallows by the Tower (see previous blog post), I asked Junior Warden Stephen Wagstaffe who the architect was. Stephen, an expert guide to the architecture of the City, told me it was Lord Mottistone who turns out to be John Seely, partner with Paul Paget in the firm of Seely and Paget, founded in 1926.

One of their first commissions involved transforming Eltham Palace into a modern home for Stephen and Virginia Courtauld, their art collection and their pet ring-tailed lemur.

The practice restored many damaged church buildings, and several of the houses in Little Cloister, Westminster Abbey, after the war. They also re-built the Deanery which had been blitzed in 1941. In a niche in the wall of one of these clergy houses overlooking St Catherine's chapel garden is a fibreglass statue of St Catherine by Edwin Russell which forms a memorial to Mottistone. The firm was surveyor to St Paul’s Cathedral, where the candles on the choir stalls are called ‘Mottistone candles'.

I guess if you’re going to a Harvest Festival Service in the City of London there can be few better than that of the Worshipful Company of Gardeners, who this year decked out All Hallows by the Tower in all manner of fruit and flower and invited other companies to join them - not just to enjoy the pumpkins and pippins and to proclaim “all is safely gathered in”, but for lunch and a lecture by Heatherwick Studio on the proposed Garden Bridge across the Thames at Temple. 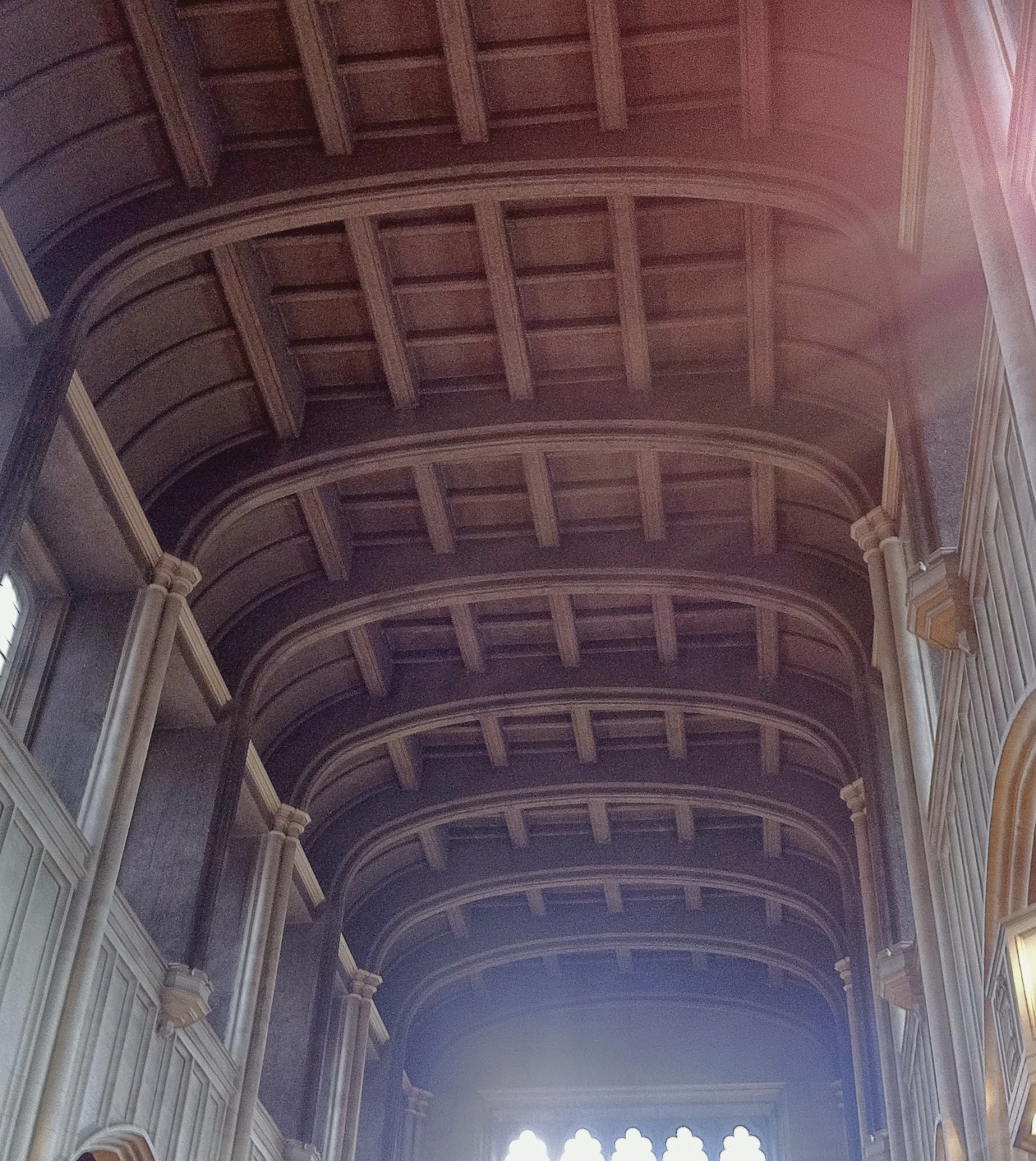 For me, apart from the lusty, celebratory singing, the most memorable aspects of the service itself were the procession of the Gardeners which included a ceremonial ‘Spadebearer’ and the roof of the nave of All Hallows which is of moulded concrete, aping the medieval design that was destroyed in the blitz and looking like it had been poured in one go. Whether this is one of the earliest Post Modern projects in the world or the impact of post war rationing, I have yet to find out.

The Spadebearer literally carried a spade - albeit a silver one - in the procession into the church and got me thinking that the WCCA should have a T-Square Bearer - to processes with the Wardens into dinners and church services. I discussed this with Past Master Jaki Howes - who still has her own T Square - and she thought it an excellent idea; although in mahogany rather than silver. 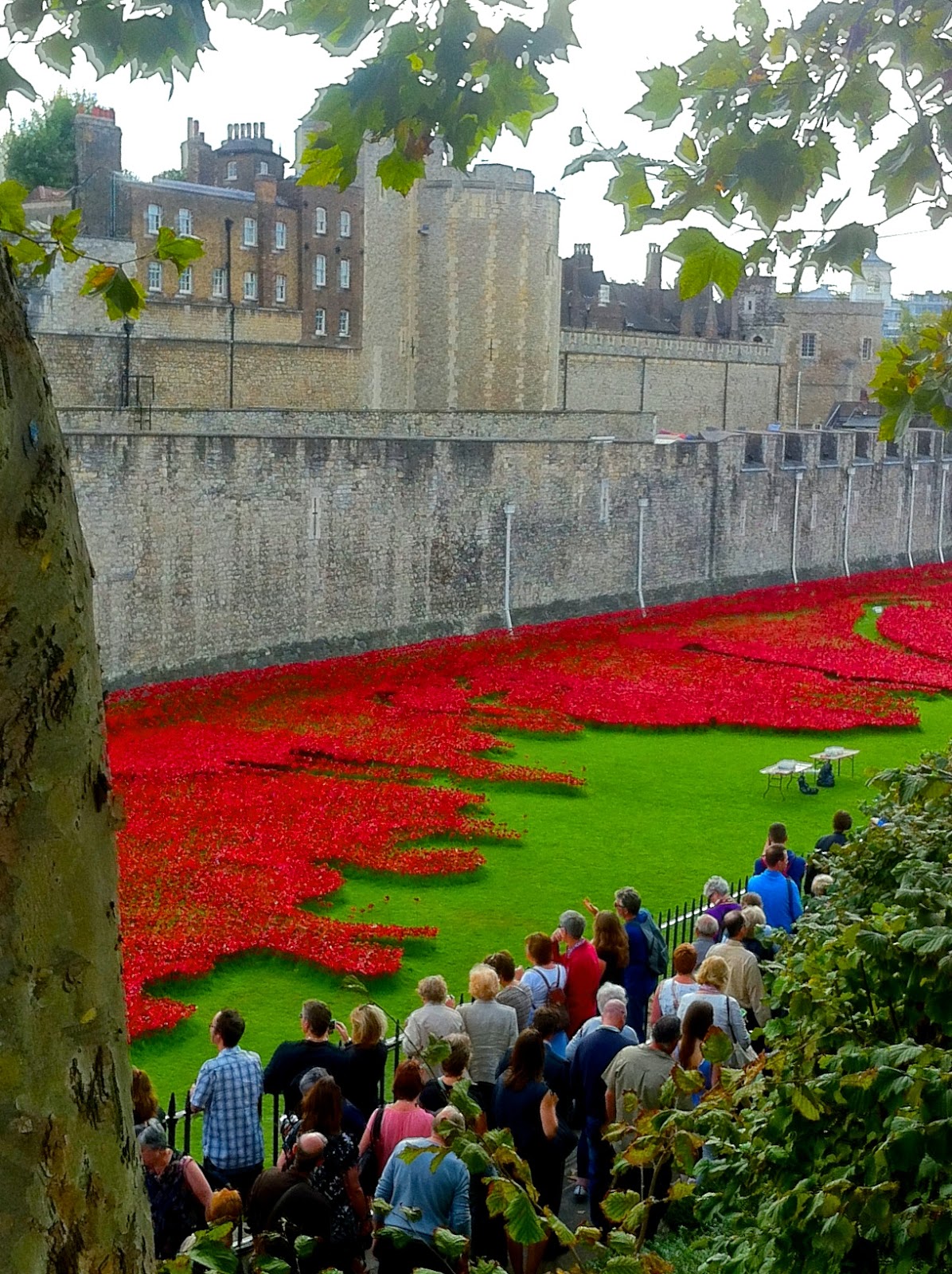 As we walked from the church to Trinity House where we were to lunch, the Past Master and I took a slight diversion to view the magnificent installation of poppies in the moat around the Tower of London. This moving tribute to the fallen of the Great War was justly surrounded by huge crowds admiring the 888,246 ceramic blooms and paying their respects. If you haven’t yet seen this spectacle, make sure you do before it is removed on November 11.

Then onto Trinity House - designed by Samuel Wyatt and built in 1796 - for a very pleasant lunch in a room overlooking the Tower and decorated with some fine portraits of seafaring chaps. The presentation on the Bridge, for the gardeners on my table at least, contained rather too much design and engineering and not enough about the planting. It also went on so long that your correspondent had to leave for another engagement, which was annoying because I had hoped to add something to the Heatherwick history of the bridge. The designers who stand in for Thomas always fail to mention that the idea of a pedestrian bridge at this point in the river was John Gummer’s, when he was SoS for the Environment and advised by the architect Liam O’Connor. The concept of a garden bridge was dreamt up by French architect Antoine Grumbach who was the public’s winner in the Royal Academy’s Living Bridges competition in 1996. Credit where credit is due. I missed being able to stick up for the architects, but enjoyed the format of lunch and lecture, which perhaps the WCCA should emulate. 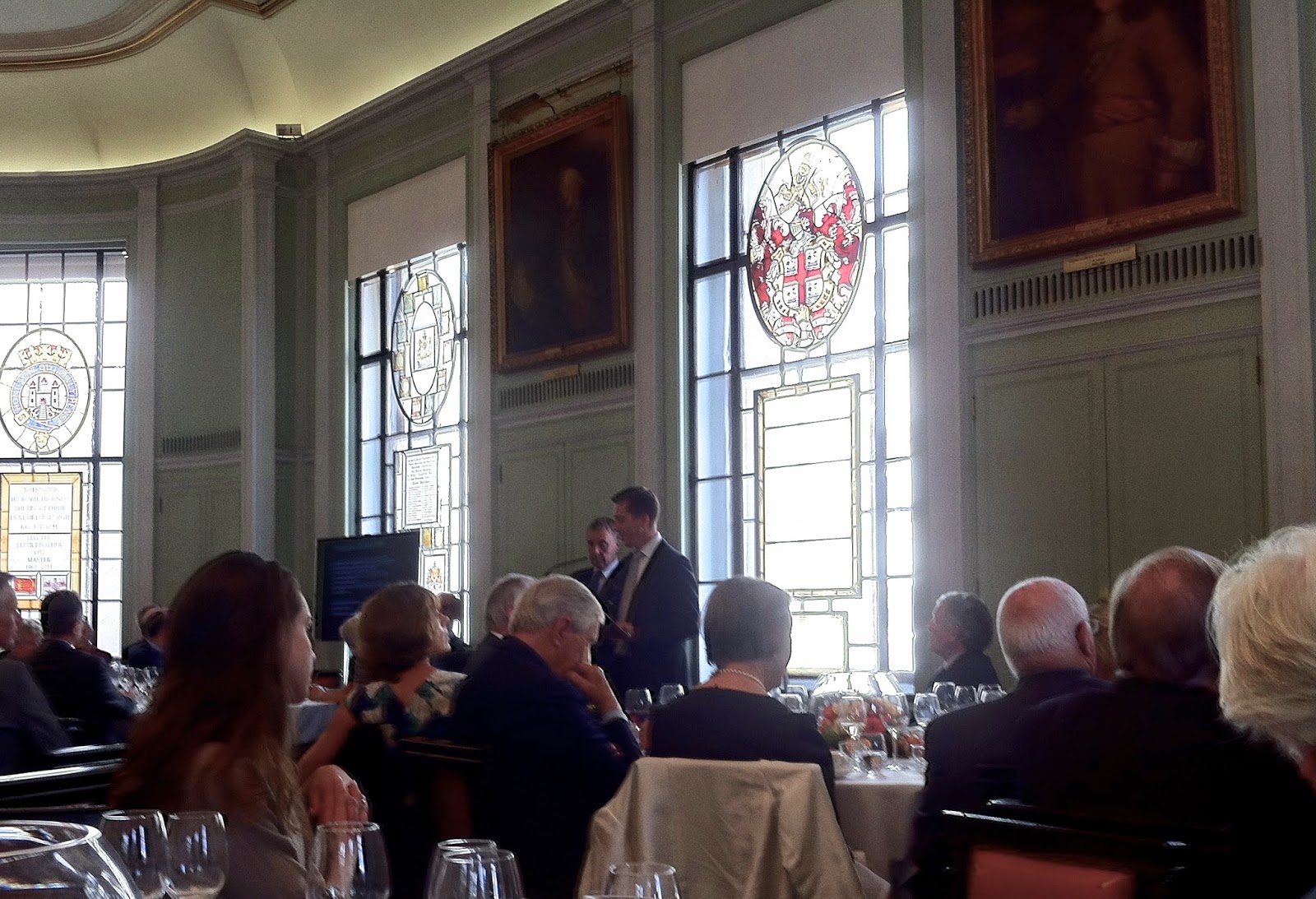