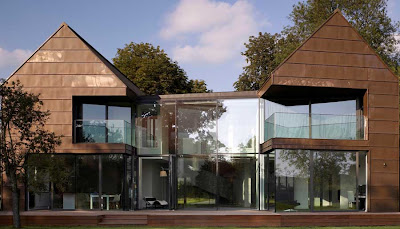 The citation noted that 'this highly distinctive building has several claims to originality. It's the first bronze-clad house in the UK; planning permission was gained via a public review; and one of the two wings is set at an angle to capture the movement of the sunduring the day ..........The bronze cladding which wil graduallty develop a deep brown atina as it weathers , complies with the planning requirement for a colour palatte sympathetic to nearby houses while creating something dramatically different'.
A third member of the Company, Justin Bere won a Commendation in the Best Small House Category of the Awards for his Camden Passivhaus (pictured below complete, it is hoped, with a Totota Prius! 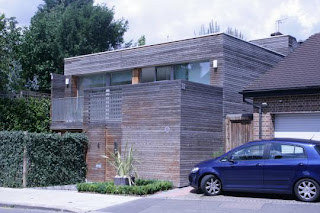 Justin Bere's office has enjoyed considerable success over the past few months both with the Camden Passivhaus and with The Larch House in Ebbw Vale which was the winner of the innovation Category , Cionstructing Excellence Wales Awards and in the Sustainability Category of the RICS Wales Awards - one of the most respected awards of its kind in the UK Construction industry.
Additionally they are short listed for Environmental Excelence in the BD Architect of the Year Awards and for a number of other Awards where results are to be announce shortly. Watch this space.
Posted by The Clerk at 9/27/2011 06:46:00 pm No comments:

The announcement last evening of the results of the Daily Telegraph British Homes Awards brought glad tdings for the Immediate Past Master Edward King and his son Liveryman Alex King. For Edward the result offers both satisfaction and a distraction to take his mind off the adjustment to his lifestyle on standing down after a full and busy year as Master while, for Alex, it offers (alongside equal satisfaction) the real prospect of future commissions resulting from the win.
Below is a copy of the press release put out following the presentation.

...our students meet up one evening...

The reception for WCCA 'mentors' and their students, at Gibberd on 30 August 2011, was attended by a baker's dozen. The tube and other circumstances conspired to prevent more people being there. Dr Mervyn Miller gave a very informative presentation on the work of Oscar Niemeyer. Born 1907 and still working! It was fascinating to see the innovative forms that Niemeyer created in concrete, particularly in Brazilia. Most of the illustrations were from photographs taken by Mervyn during the Company's visit to Brazil in 2007, and included WCCA members in company with Niemeyer himself.


Our host at Gibberd, Richard Biggins, gave a presentation on the work of the practice's founding partner, Frederick Gibberd (1908 -1984). It was enlightening to see the similarities and complete contrasts of almost exactly contemporary designers.


I think we shall have to persuade Mervyn and Richard to do a repeat performance....

Bread, cheese and wine was provided by Rosemary Curry and Jaki Howes. 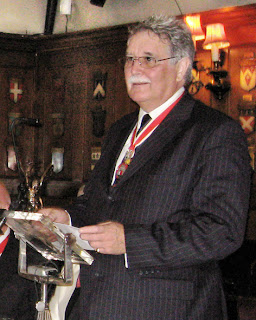 Monday September 12 saw the installation of Michael Wilkey (pictured left) as the Master for the coming year. He will be supported by Dr Mervyn Miller, Mrs Jaki Howes and Canon Dr Geoffrey Purves as Upper, Renter and Junior Warden respectively. Roger France, Master in 2009-10 , became Deputy Master. Nigel Thomson, having spent 7 years on the Court post his Masterdhip was elected asnan Honorary Assistant. Barry Munday and Anne Markey were elected and installed as Assistants while David Falla and James Walker become Assistants Emeritus. 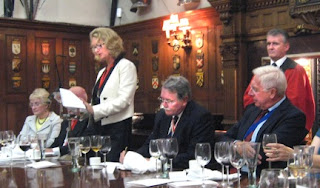 At the lunch which followed the Court, the toast to the Guests was proposed by the Master and responded to by the newly installed President of the RIBA - Angela Brady (below right) who took the opportunity to set out her aims and aspirations for the two years she has in the post. The Master thanked her and wished her well as she sets out on a jouirney in what will be a difficult time for the architectural profession. 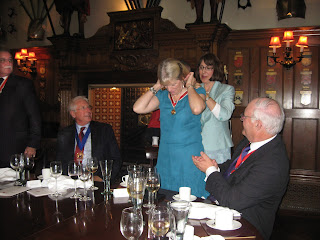 Valerie King, the wife of Immediate Past Master Edward of that Ilk, presented the 'Consort's' Badge to her successor (as 'Mistress' rather than wife to the IPM!), Susan Wilkey.
Posted by The Clerk at 9/16/2011 11:00:00 am No comments:

For what was a final hurrah the Master decided on an outing to what was, for him, almost home territory - a visit to Chichester on 26th and 27th of August. A modest sized party - those able to tear themselves away from the pleasures of their families and late summer holidays on the bank holiday weekend were rewarded with a real treat. 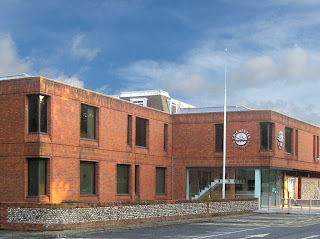 Visits included a meeting in the Council House with the Mayor - Cllr Tony French and a session there with local historian Alan Green.
Next up was a visit to the Pallant House Gallery - - which houses the legacy of Walter Hussey - Dean of Chichester who left a superb collection of modern British Art to the City on the condition that it would be housed in the early 18th century Grade 1 listed house. It has has been added to by other benefactors including architect Sir Colin St John Wilson. The building was extended in 2006 by Kentish and Long in association with Colin St John Wilson. 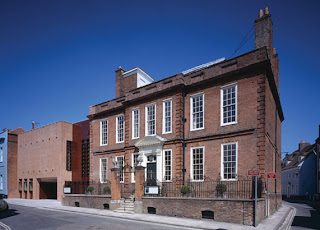 The group had a talk about the building from MJ Long and those willing to forego lunch took in the current exhibition of the works of Frida Khako and Diego Rivera.
There was an afternoon tour of the Cathedral and grounds (including those of the Bishop's Palace) led by the chief guide to the Cathedral.

Dinner was taken together.
The following day started with a tour of the historic St Mary's Hospital Almshouses in St Martin's Square led by architect Richard Meynal. The tour also included the the new buildings of the complex. 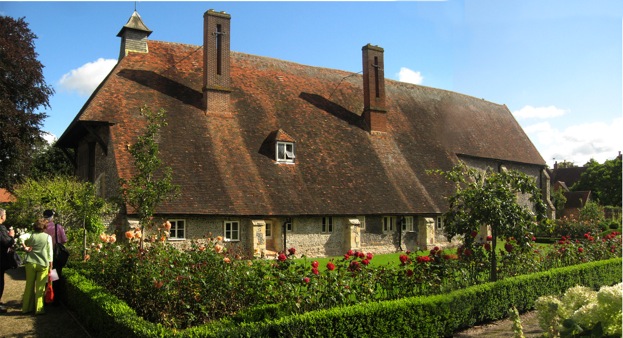 The remainder of the day was spent on a tour via West Dean College with its gardens to Singleton to look at Ted Cullinan's Gridshell Building and the other buildings which make up the Weald and Downland Museum.. 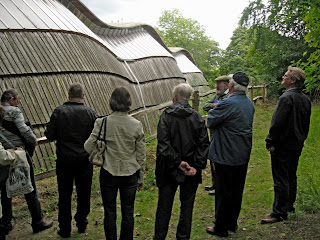 Sated with culture, the members of the party were then delivered back to Chichester to make their own way back home or the the Festival Theatre.
Thanks are due to the Master for all his careful arrangements and to Tom Ball for the use of his photographs.
Posted by The Clerk at 9/13/2011 04:22:00 pm No comments: