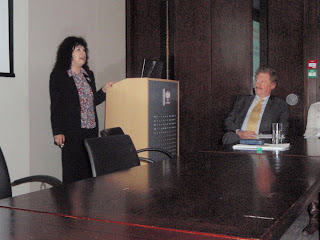 Those of you who did not manage to visit the City Marketing Suite at The Guildhall, London on 26th April 2010 missed a fantastic opportunity. The Worshipful Company of Chartered Architects hosted two eminent Urban Designers/Planners to discuss City environments. Roger France, Master of the Company introduced the speakers.
Georgia Butina Watson, PhD (pictured left) is Head of the Department of Planning and a Research Tutor in the Joint Centre for Urban Design at Oxford Brookes University in Oxford, UK. Her experience is international and she has noted expertise in urban morphology and place-making.
Joe Weiss, FICE, FIHT  (on right) is the Transportation and Projects Director for the Corporation of the City of London, UK. He has wide-ranging experience of rail, highways, urban design and even airlines, the last of which had him arrive from North America moments before he was asked to speak.
Georgia’s segment of the Lecture focussed on the Art of Place-making and Sense of Identity. We loved her definition of place identity: ‘…any cultural landscape which users draw on in constructing their personal and social identities.’ Managing townscapes produces character and supports ‘empowerment’. According to Butina Watson, empowerment includes a sense of roots, inclusiveness, co-dwelling with nature (sustainability) and an evolution of the place. ‘Nostalgia’ is fine provided it doesn’t prevent development and gradual change.
Cities, and indeed urban spaces, require permeability, stability, perimeter blocks and variety, so that people can experience the place and connect with its identity. We need responsive environments that can be animated by people.
So, how does Georgia recommend we make them? Even in Oxford, a relatively small City (but it does have a Cathedral!), there must be districts, nodes, parks, edges, landmarks and legibility. Magic.
Joe’s section of the Lecture was very much the view of our City of London, the not-very-Square-Mile, and rightly so, given our lecture venue at Guildhall and his role in the Corporation. He started with a summary of the history of London, at least from 11th century; he didn’t have time to go back to the pre-Roman era. (Is Peter Ackroyd following our blog?)
Despite the seriousness of Joe’s talk, there were certainly some wonderful ‘sound-bites’ in his potted history. The ‘Blitz’ was ‘unauthorised town-planning’, but created the wasteland that facilitated a site large enough to develop the Barbican, an English icon.
Joe’s discussion of the recent past was more serious and possibly sobering, even for us. His map of what has been redeveloped/reconstructed since the 1970s was surprising. Over HALF of the City has been remoulded.
Sustainability-economic, social and environmental-is crucial. So Joe, picking up on Georgia’s themes, went on to discuss what the Corporation is doing to make the City a better place for people, vehicles and companies. Of course, the City can not exclude vehicles, but they have set up ‘security zones’, traffic capacity control to manage the number of vehicles that are in the zones at a given time. Clever, actually. To facilitate pedestrians the City has lowered curbs and defined what could be pedestrian zones (or vehicular zones, or even bicycle zones) by intricate paving patterns and an occasional ‘sleeping policeman’.
Artistic works, lighting and green spaces, even trees, feature in the Corporation’s all-encompassing plans. Making places that are easy to access for pedestrians and moving traffic appropriately are crucial to making a City that people actually want to be in. Even if Moorgate Junction is ‘Telly-Tubby Land’, many of the Corporation’s concepts seem to work well.


Knowing your customer, whether it’s the City-worker trying to get in-and-out of his/her office or the tourist trying to work out the intricacies of medieval , town-planning and an integrated approach are clearly critical.
© Worshipful Company of Chartered Architects, London
Posted by The Clerk at 4/27/2010 06:27:00 pm No comments:

The winners of the Company's new City Architecture Awards for 2009 were announced and Certificates presented to the representatives of the winning team at the Annual Livery Banquet on Tuesday 13 April. The Banquet was held at the Ironmongers' Hall in the presence of Alderman Sir John Stuttard (the Master's principal Guest) and Sheriff Peter Cook (representing the Civic Team) who made the presentations.
The Assessors report was as follows:
This year’s judging panel comprised: The Master, (Roger France), Assistant Jaki Howes, Graham Francis and Charlotte Harrison. They were assisted by the , David Cole-Adams. OBE and the Renter Warden Michael Wilkey were prevented by the vagaries of London Transport and temporary indisposition from joining the group though followed the assessment party and, happily, reached identical conclusions.
Judging took place on Tuesday 2 March 2010; eleven buildings and public space projects were visited.
Of the projects visited 5 were new build schemes with a further five being refurbishment / re-cladding projects. There was one public open space entry.
The 2009 Award Winner
Watermark Place, – an office redevelopment incorporating retail outlets and public open space linking to the frontage.
Architects:                   Fletcher Priest Architects,
Building Owners:        Properties and UBS Global Asset 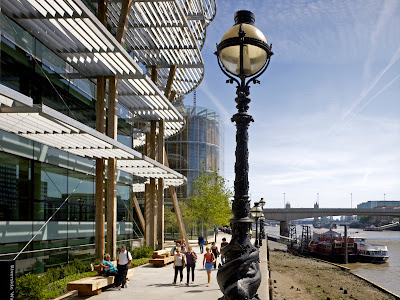 Comment:
The building replaces the redundant international telephone exchange, Mondial House. The height and massing of the building is informed by the strategic viewing corridor to ’s Cathedral and meets the City’s criteria of encouraging access to the river and the development of the river walkway.
The panel found that the development made a positive contribution to the river frontage. 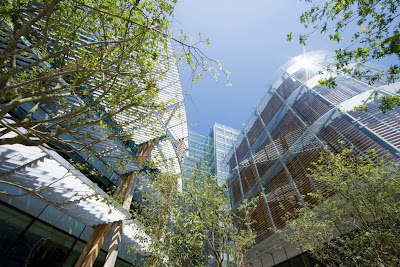 There was an intriguing contrast between the neat detailing of the main building and the gutsy treatment of the sun louvers and their timber props which made reference to the historic sailing craft that used the river. The coherent treatment of the landscaping was also commendable.
The jury commended a further two projects (both refurbishments involving either re-cladding or refurbishment behind a retained façade. : 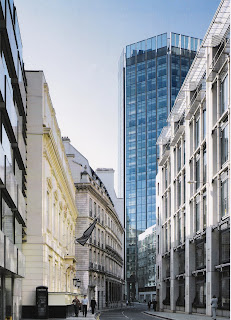 – the re-cladding, refurbishment and extension of the old Stock Exchange Building for office and retail uses.
Architects:         Grimshaw Architects with GMW
Building Owners: Hammerson Properties
Comment:
The panel commended the consistency of the curtain walling (cantilevered out to create additional floor area) and the well designed entrances which made use of the newly created pedestrian route across the site. 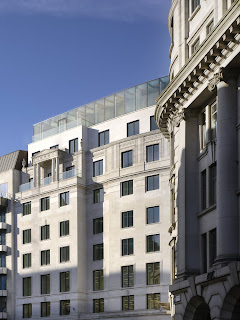 One Lothbury – the 1950’s building designed by Victor Heal was influenced by the adjacent Bank of England building. The façades to Lothbury, and Old Jewry were retained and, in places, extended and the space behind rebuild to meet contemporary office standards.
Architects:           Fletcher Priest Architects
Building Owners:  Westfield Investments Ltd
Comment:
As a refurbishment scheme, the design shows respect for the main elevations in its treatment of the new attic, and the new elements at the side are integrated into the existing fabric with commendable subtlety.

In commenting on the Awards, Sheriff Peter Cook noted
'It is tremendously important to the City to have the right people coming to work in London for it to remain internationally competitive. The environment in which they work has to be exciting, beautiful and liveable and the combination of great buildings and a carefully planned street scene make for a great City.
This Award not only assists the City by its architectural attributes it also gives a wonderful opportunity to promote the wider activity and influence of the Livery – another area that needs more exposure in order to help a better understanding of all that goes on within it.'
Further details of the Banquet itself will be posted shortly.
Posted by The Clerk at 4/15/2010 07:18:00 pm No comments: