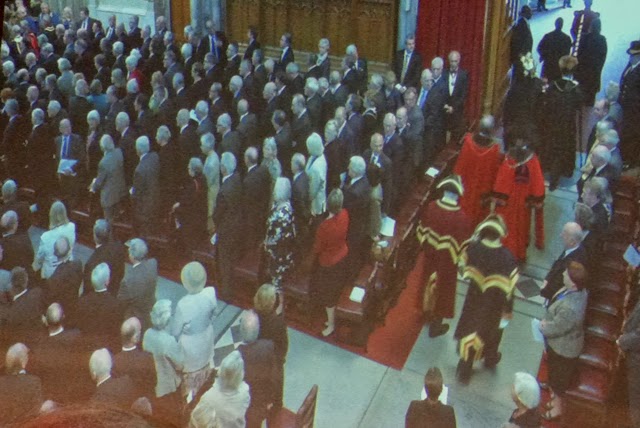 Today we elected a new Lord Mayor. By we, I mean the Liverymen of the City of London who came together in Common Hall at the Guildhall amongst much pomp and circumstance to choose a successor to Fiona Woolf, the present incumbent.

No one with any sense of history can fail to be fascinated by this annual ritual. We were advised to arrive early as the hall soon fills up. Luckily for your tardy correspondent an overflow chamber with video link is provided. The Masters, Prime Wardens and Upper Bailiffs of the 110 Companies take their places, the Mercers at the front of the queue, our own Master Geoffrey Purves at number 98, with the Worshipful Company of Arts Scholars, which was formed earlier this year, bringing up the rear.

The Aldermen and officers of the City parade in, some carrying posies to ward off the noxious smells of the medieval square mile; The Lord Mayor’s Chaplain David Parrott of St Lawrence Jewry the WCCA’s church, walks in front of the Lord Mayor, who is stoutly protected by the Swordbearer and Macebearer.

They all take their seats on the dais of the Guildhall and the Common Cryer calls us to order with “Oyez!Oyez!Oyez!” and warns anyone who is not a Liveryman to leave the room on pain of imprisonment. The proceedings of the last Common Hall are then read out - the election of Sheriffs (one of them a Tobacco Pipe Maker), of Aleconnors, who traditionally tested the sugar content of beer in the City and of the Bridge Masters, who manage the City Bridge House Trust.

The Lord Mayor and Aldermen who have passed the chair - i.e. already been Lord Mayor then leave the room while the Livery’s views of the candidates are sought. The names are read out. It is Common Hall’s task to choose two Sherriffs, one of whom will be elected by the Court of Aldermen to take the top job. Although this is the oldest democratic institution in the world, the outcome of the election these days is a foregone conclusion. When the name of Alan Yarrow - Alderman and Fishmonger - is read out by the Common Serjeant the Hall shouts in approval; when Jeffrey Evans’ name is called there are cries of “Later!” (he will, all being well, be Lord Mayor next time around). There were few calls for Sir Paul Judge the third candidate. After some mock scratching of heads the Serjeant announces Alan Yarrow and Jeffrey Evans have been elected “Unanimously”. There being “no poll demanded” the candidates and remaining alderman repair to the Guildhall Print Room for the final Ballot.

Meanwhile the Town Clerk addresses the Liverymen about the wonders of the London Metropolitan Archives ‘ “the memory of London” - and the celebrations surrounding the 800th anniversary of the Magna Carta which confirmed the City’s ancient liberties.

The Ballot over the Lord Mayor and Aldermen return to the dais and Alan Yarrow is officially confirmed as the next Lord Mayor of London, taking over the role on November 7, the day before the Lord Mayor’s Show. The colourful parade processes out as buglers play a celebratory fanfare. 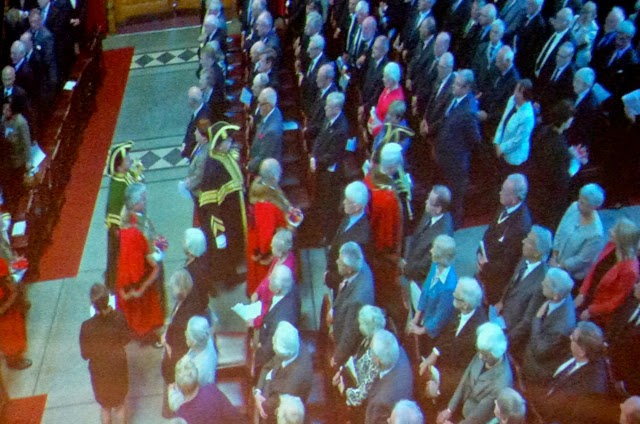 Our democratic duty done, the dozen or so members of the WCCA repaired to the Stationers Hall where we joined members of other companies for a convivial lunch.

A thank-you letter from Polly Damen

Last week I was made a Freeman of the City. It was a lovely day and I took my parents along (see attached photos) and Murray Craig actually knew my mother so that was very nice.

I wanted to thank you for all your support and in making me feel very welcome at the Worshipful Company of Chartered Architects events.

A new steward is created and promptly indents a new Student.  Yasmin Shariff was made a Steward of the Company and Samuel David Evans was bound to her as 'Student'.

The Ironbridge Weekend is an annual event. Profits go to the Ironbridge Gorge Trust. 'Masters' go to set up a 'Past Masters' Association' for the year passing.

Everyone goes for education, food and fun. It rained torrentially - some groups escaped. There were visits to most of the Museums in Coalbrookedale - fascinating!

There was a dinner - people were seated with people they were least likely to know - good networking with food and wine. There was a ball - as above - without much dancing. There was time in the bar... the Master played the piano. There was a meeting where it was decided that there would not be separate organisations for Masters and Consorts
and where Michael Harrison was elected
Chairman of
'14 All'.
***
Posted by Jaki at 9/11/2014 02:23:00 pm No comments:

It rained on 3 June, throughout the Founders' Day parade at Chelsea Hospital. The pensioners had to stick it out. About two thirds of the spectators left - they were very very wet.

It continued to rain during the afternoon at the Buckingham Palace Garden Party. No photographs were allowed but you can imagine - soggy morning suits and droopy dresses.

It rained during the annual Livery weekend at Ironbridge.

It rained on 28 June when the Queen (she looked stunning) reviewed reserve cadets at Chelsea. Most other spectators were very very wet and, of course, had to stick it (or rather umbrella it) out.