The rest of March 2014 - one art exhibition private view, one lecture, one meeting and one lunch.

The highlight of the month was the day that the Clerk and I spent at Apothecaries' Hall for the Livery Schools Link. Twenty-seven Livery Companies had stalls, and many were giving practical demonstrations of their craft to some 400 visiting students from City of London schools. The WCCA stall was provided by Jerry Tate Architects. Several of Jerry's staff manned the stall, including his business partner, Rory Harmer. Quite a shock for Rory and the Master, as Jaki was his tutor at Leeds Metropolitan University before Rory went on to the Bartlett.

Evening of 13 March 2014. Reserve Forces and Cadets Association for Greater London, Spring Meeting and Lord-Lieutenant's Awards Ceremony at Yeomanry House. Yeomanry House is a huge hanger-like drill hall with hard surfaces. There were hundreds of people - and drummers. A surreal experience because I couldn't hear because of the reverberation and couldn't see either. 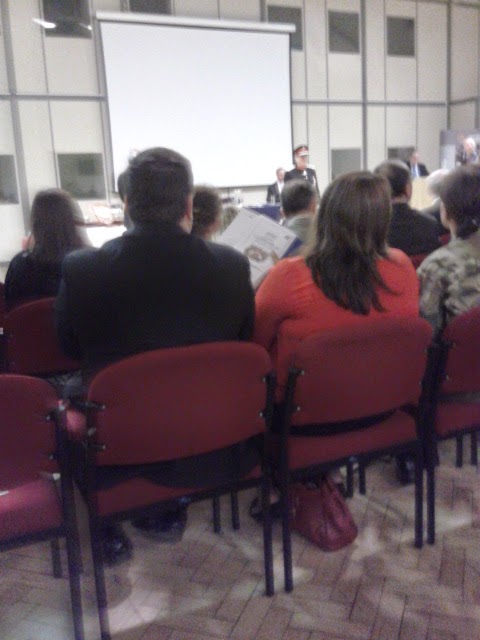 On 12 March 2014:
the day after the Middle Temple visit, was the Security Professionals' Lecture at the RAF Club. The speaker was Martin Howard CB, GCHQ Director of Cyber-Policy. The subject was "Cyber Security- Risk, Impact and Protection". The lecture was delivered under the Chatham House Rule.

13 March 2014:
The Worshipful Company of Builders' Merchants City and awards Luncheon at the Cutlers' Hall. Found myself seated between the Master, John Poore and the Lord Mayor's Consort, Nicholas Woolf.

The highlight was the speech delivered in rhyming couplets by the Lord Mayor and her Consort - no mean feat. 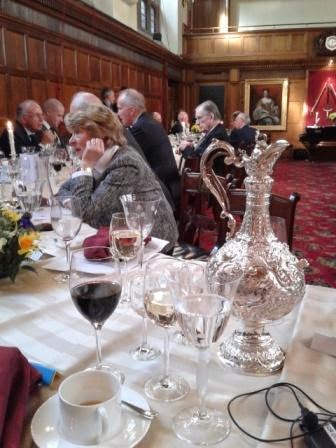 This a picture of the Cutlers' Hall, taken after the Lord Mayor had departed and before the stand-up comedian. His performance was a trifle ripe or even a ripe trifle.

March started with the City of London Guide Lecturer Association 11th Annual Derek Melluish Lecture at the Dutch Church in Austin Friars. It was given by the Rt Hon, the Lord Cope of Berkeley. He was a former Conservative MP and Government Minister and now an energetic member of their House of Lords. He talked about his political life and the number of positions he held during his political career. Now in his 70's Lord Cope sits in the House of Lords and offers his wide ranging experience to the members and in debates.

Very interesting.
So was the building. It was designed by Arthur Bailey and completed in 1954 in a style that I would describe as 'stripped classical'.

Then there was the Modern Companies' Dinner at the Wax Chandlers' Hall. The Hall is not square - this has a strange effect on one's spatial perception. The City Remembrancer was the guest speaker. He described Livery events as "protocol, alcohol and cholesterol". I couldn't possibly comment.

The following day was the WCCA visit to the Middle Temple, pictures of which, taken by Geoffrey Purves, are on the last blog post. This visit was followed by a convivial supper at El Vino.