The Company is to host its annual Peter Milo Memorial Lecture in the City Marketing Suite at Guildhall on Monday 26 April 2010. Details of the event which will take the form of a discourse are as set out below.
Quality Streets, Quality Townscapes
PETER MEMORIAL LECTURE 2010 - Monday 26 April 2010

As a Company we are keen encourage good architecture and planning in the Square Mile. One of the ways in which we can do this is to foster discussion and debate about architecture and urban planning. With this in mind the Master has arranged for the Milo Lecture to be a discourse this year dealing with the topic of creating identity in city townscapes.
There are to be two speakers – Professor Georgia Butina Watson – Professor of Urban Design and Head of Department of Planning at Oxford Brookes University and Joe Weiss – Strategic Transportation Director at the City of London Corporation. 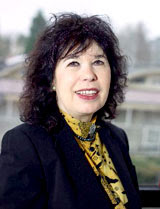 Professor Georgia Butina Watson BA MA PhD
’s professional expertise lies in the area of urban morphology, urban regeneration and in developing approaches to involve local com-munity groups in the improvement of local urban areas. She was involved in setting up a database system for recording and analysing vacant and underused land and was a project co-ordinator of the DoE sponsored study on ‘Quality in Town and Country’.
She is Director of CABE’s Built Environment Virtual Teaching Package Project and a major contributor to CABE’s digital library of urban design good practice

Joe Weiss MSc FICE FCIHT
Joe Weiss is a Chartered Engineers and a Fellow of the Institution of Civil Engineers and the Institution of Highways & Transportation. Over the past 35 years his time has been split between jobs in central government, the priv-ate sector and local administrations.
’s employment model has resulted in greater pressures on public space and rail transport due to increased commuting. This, while it contributes to climate change, may still be more desirable than dispersed jobs which are mainly car dependent. Joe believes he has been able, occasionally, to chart a politically acceptable course through this maze.
Professor Butina Watson will present some conceptual models that allow us to understand the nature of identity in the urban scene and Joe Weiss will demonstrate the ways in which the City Corporation works to encourage distinctive townscape quality in new building developments. There will be time for discussion after the presentations and it is hoped that the speakers’ contributions will stimulate a healthy debate on the issues raised.
The lecture will be held in the City Marketing Suite at Guildhall commencing at 5.00 for a 5.30pm start.  Wine and nibbles will be available to allow informal association from approximately 6.40pm. The event is will finish at 7.30pm.
The City Marketing Suite can be found at the corner of and , behind the . It is opposite no. 8 Basinghall Street and within easy walking distance of all public transport
The event will be open to members of the City Architecture Forum and other allied organizations and to London Region architects generally. Tickets charged at £15.00 per head (£4.00 for Company students) will be allocated on a first come first served basis – as space is limited, early application is encouraged by application to the Clerk - David Cole-Adams - on 020 8292 4893 or by email to wccaclerk@blueyonder.co.uk.

It being bound to be a fine day the Company's selected assessment panel consisting of the Master (Roger France), Paul Finch (Chairman, the Renter Warden (Michael Wilkey), Jaki Howes, Gaham Francis and Charlotte Harrison will be sent on their way tomorrow (2 March) by the Clerk to select the winner of the New City Architecture Award for 2010.
Those familiar with the City might like to hazard a guess as to which project the judges might favour.
The award is given for the 'building or other work of architecture, completed free of planning conditions, in the qualifying year which makes the most significant contribution to the streetscape and skyscape of the Coty of London.'
The list of entries selected for the judges to consider are (in no particular order):


1. 1 Lothbury   - façade retention, extension and new build - Fletcher Priest Architects
2.  Dashwood House, - Recladding and refurbishment of an office building with 2 storey and plant room extension, change of use of part ground and mezzanine levels  and the removal of the bridge to the Highwalk. - Fletcher Priest Architects
- Office building with retail – Architects: Rolfe Judd
- Recladding and refurbishment of office building with retail -    Houseman Henderson Architects
5. - Part refurbishment, part redevelopment of offices Architects: Rolfe Judd
6. Grants Quay - Street  scene enhancements on ; improved seating and Landscaping
Street Scene Team, Corporation of with Bere Architects
7. - Recladding and extension of former Stock Exchange building for office and retail uses -  Nicholas Grimshaw & Partners with GMW Architects
8.   - Office development with retail on western half of former Stock Exchange building site - Eric Parry Architects
9. -    Office development with retail uses and new public square - Eric Parry Architects
10.  8-10 Old Bailey - Office development - Sidell Gibson Architects
, - Office  redevelopment including retail uses and public open space - Fletcher Priest Architects
Comments will be welcome but are unlikely to have a great deal of influence on the judges' decision. It is possible that a short list with relevant photographs will be posted withing a few days - watch this space.
Posted by The Clerk at 3/01/2010 04:20:00 pm No comments: