Monday 1/10 was COMMON HALL at Guildhall for the annual election of the Lord Mayor of the City of London. As a Liveryman I’ve done this several times, but this was special. As Master, I took Breakfast at Carpenter’s Hall, then went to the Guildhall crypt for robing, and marshalling for the procession to St. Lawrence Jewry for the Service. Then back across the yard for the processional entry into Guildhall, the full panoply culminating in the Lord Mayor. The election is by acclamation: not the democratic ballot. I’ve often thought of it as ‘Politburo with Pageantry’, and splendid it is! Afterwards an excellent luncheon at Haberdashers’ Hall rounded the proceedings off nicely. In the evening I was guest of my cousin Mr Justice (Sir Gary) Hickinbottom at the Bakers’ Company Dinner, excellent food in convivial surroundings. My grandfather Sam Hickinbottom built up a successful bakery in the Black Country after redundancy as an ironworker by selling bread made by his wife Martha off a handcart: such was the spirit of enterprise in 1896.

The Musicians Company Evensong at St Pauls Cathedral late afternoon on 3/10 was another great occasion, its pageantry complemented by apt music at one of the great Anglican ritual services. Choral music aside, the most moving item was the Guildhall Strings playing Elgar’s Elegy beneath the twilit dome. After a quick bite at the Reception, reunited with my consort Ann, it was hotfoot down Cheapside to the ARBITRATORS’ CONCERT at St Mary le Bow. An intriguing combination of organ music, a virtuoso Ukranian pianist-composer and a vocal duet culminated in Rossini’s hilarious Duet for two cats, which as usual brought the house down.

On Monday 8/10 Stephen Wagstaffe and I joined our new 'regiment' the Orpington Sea Cadet unit on their visit No. 10 Downing Street, informal, informative and fun (no difficulty with security!) where we were welcomed by Larry, the Downing Street cat. The unit was very smartly turned out with the cadets in immaculate naval ratings' dress and their 'top brass' in formal frock coats with brass buttons, gold braid around the cuffs and peaked caps. The guides couldn't have been more friendly. As we sat round the Cabinet table, one of the youngest took David Cameron's seat: I was opposite in Nick Clegg's place. Photographs were taken, and I hope to get these from the unit. We proceeded up the cantilevered stair, its well lined with portraits of every Prime Minister from Walpole, and into the State suite used for receptions. We were invited to sit in all the furniture: a girl cadet stood up pretty sharply on being asked 'Are you comfortable?' - 'Yes' - 'You might be interested to hear that that chair (gold French ormolu) is insured for £1 million'! We also amired the plaster vaulting by Sir John Soane, in the State Dining Room and in no. 11 in Geoirge Osborne’s Conference Room. It was a great occasion, and Stephen and I felt privileged to be hangers on. On October 30th my predecessor Michael Wilkey and I will travel to Tilbury to see the unit training on shipboard.

Back to Haberdashers on Wednesday 10/03 (?) for the Tin Plate Workers Court Dinner, another lively affair. Andrew Balcombe, Master, had been a guest at my installation, when we both shared our penchant for the work of Charles Rennie Mackintosh. Andrew, whose proud boast is that he has lived on the same double page of the London A-Z map, is the latest of three generations of Company Masters, a dynasty only feasible with the patrimony of the older companies, and the top table was a roll call of family.

So to Tuesday 16/10, my own Master’s Reception, was held at THE ART WORKERS’ GUILD HALL, Queen’s Square, Bloomsbury. The Guild was founded in 1884 as a coming together of architecture and the crafts associated with building. I am a Brother of the Guild, and I invited their Master, George Hardie (resplendent in robes designed by C F A Voysey) to tell us something about this singular organisation, together with Simon Hurst, the architect who recently restored the hall (which was built as a laundry). Around 40 people spent an informal and informative evening, with appreciative feedback.

On Thursday 18/10 I attended the Turner’s Company Reception at Carpenters’ Hall. This celebrated their exhibition Wizardry in Wood, a comprehensive demonstration of their craft since mediaeval times, including artefacts recovered from the Mary Rose wreck of 1545. The hall was filled with skilled craftworkers, demonstrating turning and selling their wares. The court room contained the prize exhibits, scarcely believable in their complexity and delicacy unless assisted by the wizardry of Harry Potter! 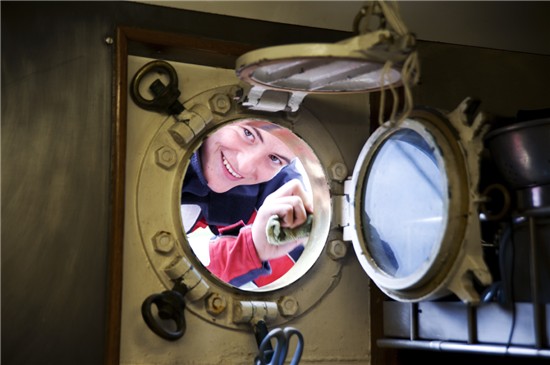 The sea cadets and the Master visit Downing Street - 2

In this post we show Stehen Wagstaffe's photographs of our visit to No. 10 Downing Street and the private conference room used by George Osborne in no.11 - and the present Downing Street cat, Larry!

This visit was made by our new 'regiment', the Orpington Sea Cadets unit, with whom my predecessor, Master Michael Wilkey has signed up a connection.

The visit, on the afternoon of Monday 8 October 2012, was informal, informative and fun, and we were langourously welcomed by Larry, the Downing Street chief mouser. The cadet unit was very smartly turned out with the the cadets in immaculate naval ratings' dress and their 'top brass' in formal frock coats with brass buttons, gold braid around the cuffs and peaked caps.

Our phones were left in the hall, before the tour commenced. The guides couldn't have been more friendly. As we sat round the Cabinet table, one of the youngest cadets was in David Cameron's seat: I was opposite in Nick Clegg's place.

We proceeded up the cantlevered stair - its well lined with portraits of every Prime Minister from Walpole - and into the State suite used for receptions. We were invited to sit in all the furniture: a girl cadet stood up pretty sharply on being asked 'Are you comfortable?' - 'Yes' - 'You might be interested to hear that that chair (gold French ormolu) is insured for £1 million'!

It was a great occasion, and Stephen and I felt privileged to be hangers-on to the cadets.

On 30th October 2012 Michael Wilkey and I will travel to Tilbury to see the unit training onboard ship. 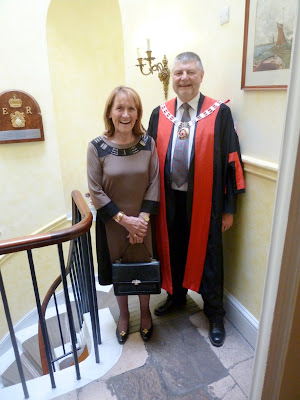 The Installation usually takes place around 10 September: this year it slipped back to the 18th so the first two events were a taster, literally. On 11/09 the Modern Companies Dinner held at Staple Inn, High Holborn was a useful way of meeting my peers. Two days later it was the Court Leet of the King’s Manor Jurors’ Dinner at Old Bailey, as the guest of David Cole-Adams, soon to become our Clerk Emeritus, and in early October Master of the Tylers and Bricklayers. I’m not sure that I understand the esoteric origin of this organisation, but this is true of so many City of London institutions. It was certainly an event which featured good conversation in unusual surroundings.

The real thing occurred on September 18, the Installation Court and Lunch held at Watermen’s Hall, a delightful 18th century building. I’ve witnessed the Court procedure many times, but it was unnerving to be at the centre, with the transition made elegantly by Michael Wilkey, and David Cole-Adams reading my declaration, and those of my Wardens – Jaki Howes, Geoffrey Purves and Peter Murray, before I replaced him (after twelve years’ outstanding service) with Ian Head. There was a public tribute to David, and presentation of his Clerk Emeritus ‘feathers’ at the lunch. Susan Wilkey passed the Consort’s badge to my stalwart friend Ann Yorke. I was supported by family and friends, as well as many familiar faces from the Company, with the Master Tin Plate Worker and Master Information Technology Company as Company guests. The principal Company guest was the architect Robert Adam, who spoke about the challenge of globalism in architecture and referred to our work together.

On 20/09 the Livery Halls Charity Hall Walk brilliantly organised by the Company of Environmental Cleaners launched a band of begowned, chained and hatted men and women from Armourers’ Hall on a zigzag route through the byways of the City of London, to and from the extremities of Glaziers Hall, attached to the south abutment of London Bridge and HMS Wellington on the Embankment, with a refuelling stop for lunch at Bakers’ Hall and concluding with a cuppa at Grocers’ Hall. I stayed the course of 8.5 miles and forty halls and raised £900, of which £200 will go to the Lord Mayor’s Charities, the remainder to our WCCA Charitable Trust Fund.

Open House Saturday 22/09 saw me in St Stephen Walbrook, one of Wren’s most perfect churches, usually hidden behind Mansion House, but now exposed by demolition for redevelopment of the massive Bucklersbury site. The circular Henry Moore Altar in St Stephen’s gave a portent of an event the following week. On Sunday there was a lunch generously given by David and Mary Cole-Adams at their home in Muswell Hill, for the Masters (and their spouses) that he had served. A delightfully informal event, with abundance of good food good wine and good company!

Nothing until Thursday 27/09. The Guild of Air Pilots Tymms Memorial Lecture at the Royal Aeronautical Society was an insight into the complex logistics of the aerial warfare of the First Gulf War, somewhat drily presented by Air Chief Marshall Sir William Wratten, not my favourite topic, but a comprehensive view of the almost labyrinthine command structure. The next day Friday 28/09 saw my first planned Company visit, to the Henry Moore Foundation at Perry Green, near Bishop’s Stortford, Hertfordshire. 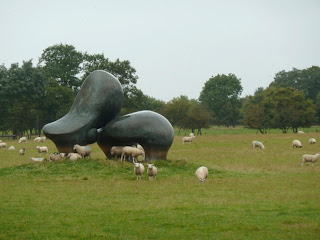 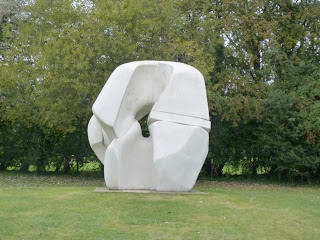 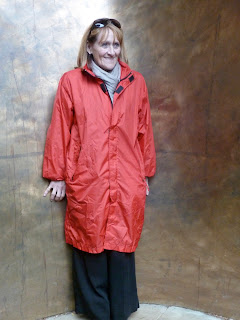 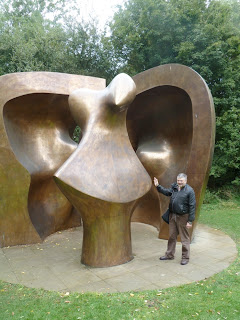 Henry Moore (1898-1986) was the archetypal Yorkshireman yet he spent over 45 years working in rural Hertfordshire. In 1940 his London studio was damaged in an air raid and he moved out to rent part of an old farmhouse ‘Hoglands’ that he’d heard about through friends. Surprisingly he stayed put, bought the whole house and established the first of many studios, dotted around a domain that includes major sculpture set in a garden designed by his wife, Irina. The whole is now administered by the charitable foundation, set up in the late 1970s. We had an outstanding day, visiting ‘Hoglands’ in the morning, its artistic clutter ranging from pre-historic and ethnic sculptures, to paintings by Courbet and Manet, interspersed with antique and 1950s furnishings. The afternoon tour included the Bourne studio with its outlook on the sheep field, the subjects of his sensitive sketches, and the Aisled Barn, a mediaeval structure relocated from one of his farms, hung with tapestries from the Singleton workshop, taken from some of his most characteristic graphics, including the wartime Shelter Sketchbooks. The guides were all excellent with insights into the man and his motivation. Between tours we lunched in ‘The Hoops’, now owned by the Foundation, where we were well fortified. Not even the bouts of inclement weather could dampen our enthusiasm.