The Company in America

A number of members of the Company have recently returned from the annual architectural study trip - this time travelling down the Eastern Seaboard of the USA from  Boston to Washington and Monticello. What follows here and in subsequent postings (not too many goodies all at the same time) is one member's record of the trip. A far more scholarly account wll be prepared by Dr Mervyn Miller and posted in due course on the website itself.
Monday 23 August – having assembled in Boston the previous evening we were greeted by unremitting rain for the next three days. After a summer of drought-like conditions this was welcomed by Bostonians with lawns but not by us. 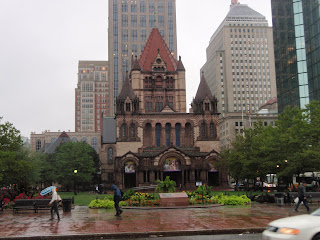 Undeterred we set off on a walking tour of Copley Square and the Back Bay area led by a ‘Walk Boston’ tour guide. HH Richardson’s Trinity Church (completed 1877 and pictured left) would have benefited from the spire which had been planned but never erected following a loss of confidence resulting from the collapse of the spire on the nearby Old Church. Richardsonian Romanesque with typical polychrome brick and tile detailing and wonderful interior with impressive clear spans. 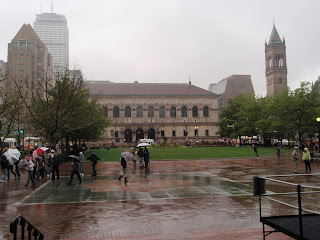 Directly opposite sits McKim, Mead and White’s Boston Public Library (right) commenced in 1888 – a handsome civic building with a quite wonderful reading room running the full length of the building (and other spaces) on the upper floors. So well regarded is this work that it is known as the McKim Wing – not many architects get that lucky. The delightful cloistered spaces behind happily survived Philip Johnson’s 1972 extension which seems like a clumsy tribute to Louis Khan. Nice slated roof though.
Back Bay in the rain loses something of its charm though there were some Richardson buildings showing inventive brickwork. 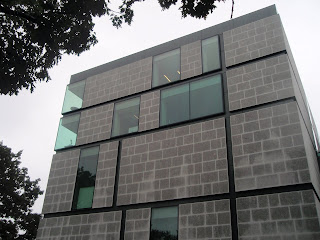 The weather conditions equally didn’t do much for the exterior bits of Norman Foster’s extension to the Boston Museum of Fine Arts (seen left). The detailing of the stone cladding seemed curiously unconvincing –generally slick, probably costly and disappointingly bland. Yet to open the views of the interior from the visitors’ gallery promise much more and, with what is thought to be an excellent collection of American art, will certainly be worth a revisit.
The final stop of the day was the John F Kennedy Presidential Library and Archive proudly sited on the water’s edge overlooking the City across the Bay. IM Pei ‘s 1979 building is perhaps a little dated but a visit is an inspiring and moving experience.
Tuesday August 24 – a day given to visiting academic establishments. First, Harvard – English but not quite, quadrangles but not quite. Sever Hall by HH Richardson (1880) was a strange composition with some excellent brickwork originally laid (we were informed) in ‘blood’ mortar. Some details might just have influenced Frank Lloyd Wright should he care to admit it. 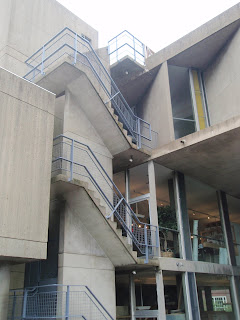 Le Corbusier’s only complete US building – the 1963 Carpenter Center for Visual Arts seemed well suited for its purpose and was fun to visit. He would probably not have approved of the addition of the guard rails to stairs and the ramp that runs through the building which resulted from a recent Health & Safety audit. 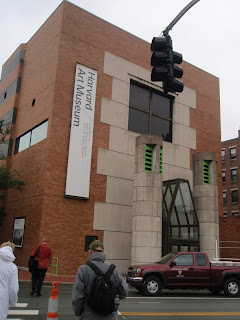 Then James Stirling’s 1985 Arthur M Sackler Museum (pictured left and sorry about the traffic lights)to which we were allowed only limited access – pity – some interesting spaces were inviting. Many of the traditional buildings including the flamboyant and overbearing Memorial Hall might, in the interests of time, be left off future tour itineraries be they ever so august. 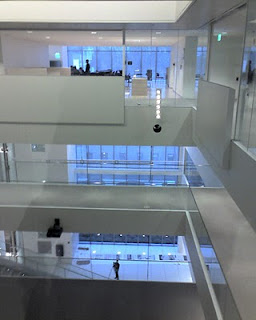 Then off to MIT. The new (2010) Media Arts and Sciences building by Fumihiko Maki is a wonderful counterpoint to the adjacent (and somewhat sidelined) IM Pei's Weisner Center. This was scintillating, beautifully detailed and well finished – what a place to challenge creative minds. 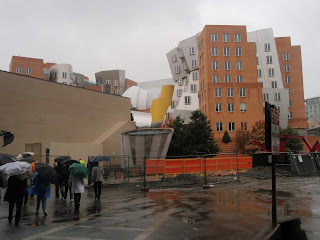 On the other hand Frank Gehry’s enormous and unsatisfactory 2004 Strata Center seemed out of place and showing clear evidence of detailing defects. For all that, it was quite fun to see it and it and creates the environment probably suited to the Computer Sciences and Artificial Intelligence Labs (among other things) it houses. 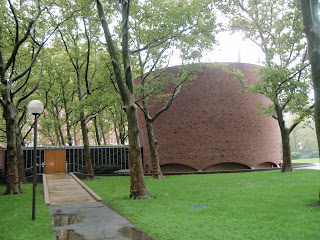 Ereo Saarinen’s 1955 Campus chapel and the Kersage Auditorium restored the spirits. The chapel was exquisite, the auditorium less so. Then onto Alvar Alto’s Baker House 1947 much admired Dormitory Block. Justly, in my opinion, recognized as a masterpiece of modernism. Steven Holl’s over scaled (perhaps I mean curiously scaled) Simmons Hall Dormitory block was only visible in the distance through the rain. Perhaps best. 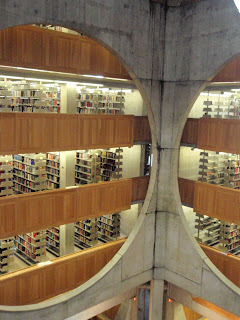 Wednesday August 25 – more rain en route for Louis Kahn’s renowned Exeter Academy Library (1945) which proved to be the anticipated tour de force despite the fact that the rain showed the continuing and apparently unresolvable leaks. Strong forms, subtle details and a rich palatte of materials made for a pleasurable experience. Lucky school children.
Via the Currier Museum in Manchester New Hampshire  as a jump off point for a visit to FLW’s 1950 Zimmerman House built for clients who loved it . Most of us thought of it a small, largely unliveable-in trophy house. The highlight of the visit was one of our number being roundly scolded for sitting on a banquette seat. He was photographed thereafter on every chair he was foolish enough to sit on. 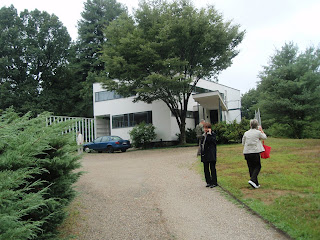 To Lincoln MS for the 1938 Gropius family house. This was a fascinating modernist icon with wonderful connections to the cultural world of the time. What had clearly been a comfortable house for the family is now a museum piece. Then onto another modernist house built in 1937 by architect Henry Hoover and shown to us with justifiable pride by his welcoming and charming son.