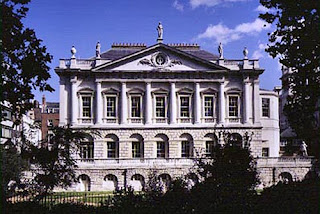 Those who joined the recent visit by as large a group of members and guests as could be accommodated for an early evening visit to the 1756-66 Spencer House were treated to a magnificent spectacle. Ten years of painstaking work had restored the full splendour of the original designs.

The house, billed variously as 'London's finest surviving eighteenth century town house' and 'a magnificent private palace' owes much to the original architect - the Palladian exponent John Vardy (1718-65) who was a colleague and the chronicler of the work of William Kent and Inigio Jones. He was also responsible for the the ground floor rooms including the particularly spectacular Palm Room. Sadly he was displaced by James 'Athenian' Stuart whose new found passion for classical Greece culminated in rather more overblown decoration exemplified by the Painted Room on the first floor. While Vardy's designs seemed to derive from the Palladian pattern books and were, as a result, splendily flamboyant, Stuart's seemed simply imitative. It was a shame that they had to share the same house.

Henry Holland also had a go - his interventions being most obvious in the way in which some of the Ground floor rooms interconnected to make the house more 'user friendly' for later Earl Spencers.

All in all, the visit was a memorable one and the Master is to be congratulated on making it the focus of his Reception.

The visit was followed by a most agreeable couple of hours in a nearby wine bar where a buffet supper and the odd glass of wine oiled the wheels of conversation.
Posted by The Clerk at 11/11/2010 06:14:00 pm