13th May 2011
The afternoon was planned for a personalised tour of Santiago Calatrava's new (opened 2006) Opera House and some of his other buildings in the City of Arts and Sciences. 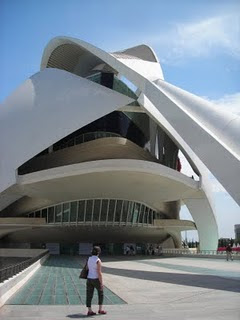 The 'sommelier' (a.k.a. husband) and I decided to walk along the 'linear park' created in the riverbed of the former river Turis. Variable, from un-
reconstructed to plenty of football pitches and lawn tennis courts (not red clay, sadly!) to lush gardens with mature trees of many species. This time of year, plenty of colour including late spring flowers, too. The cypresses, not yet mature are just a little odd, though. 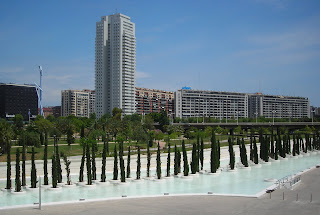 The Opera House is impressive. The geometrics, including interlocking hyperbolic paraboloids, express Calatrava's engineering background and are evocative of Nervi's earlier work in Italy, but even more daring. The front is pure Calatrava, looks like the prow of a ship! Not totally like the images of Ysios in Rioja, but the structural design here is far more exciting. A couple of pin-pointed joints!
Raw concrete, blasted and then bleached to a bright white-fitting in this Mediterranean climate-suggests a huge seagull landing on the ground. We only saw a few of those around, though, despite being fewer than 3 km from the sea.
The water features are also Calatrava-designed and very good, although the lines of trees are almost French rather than Valencian? 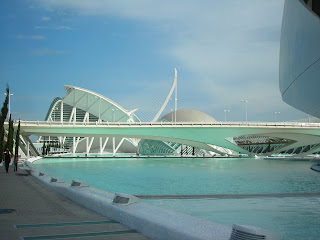 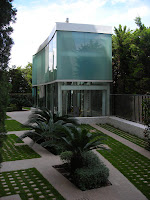 What else? Calatrava considers himself a sculptor, as well as engineer and architect, so every detail had to pass his judgement. A few of the clever, but not necessarily savoury, details include the door handles (female and male visages and male and female torsos, although the latter seem more androgynous than obvious.) Does this seem just a little weird to anyone apart from me?
That aside, the bright cobalt blue colour is evocative of the Mediterranean and of Calatrava's well-known love of sailing. 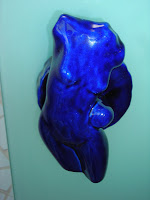 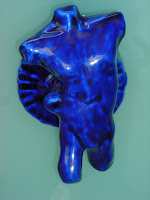 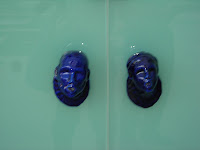 Calatrava extensively uses 'trencadis', a mosiac technique using broken ceramic tile shards grouted together, perhaps as a tribute to his favourite Spanish architect, Gaudi. Mostly bright white, but cobalt blue also features as an accent. Note the roof garden wall below with its reflections of sunlight off the trencadis. 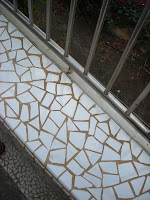 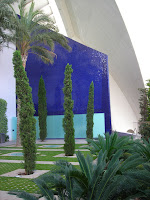 Calatrava is obviously a bit of a control-freak, which sometimes works. The internal stair handrails are pretty slick, if a tad complicated. 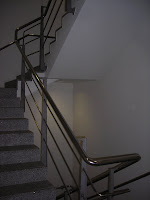 Ultimately, it's the external formality and geometry of not just the Opera Palace of the Arts , but also those of the Hemisheric (IMAX Theatre), the Umbracle (botanical garden overlooking the complex), the Agora (in the shape of a winged helmet, used for amoung other activities the Tennis Open 500) and the Aquarium that are the most impressive. Plenty of complex interplay with views of the linear park, the sky and the land/water features.
Below: clockwise from top left: the Hemisphere, a view from the Opera towards the linear park, the Umbacle, the Science Museum and Calatravs's geometry at play (or opera!) with the unattached movement joint! 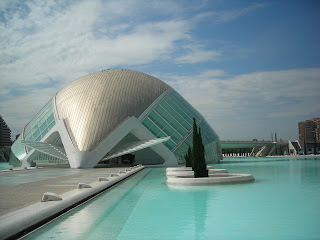 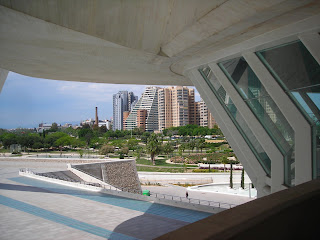 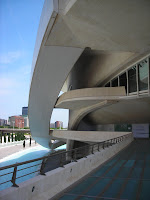 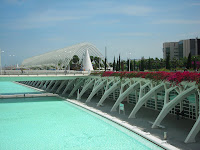 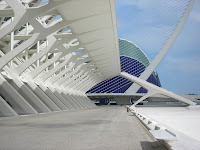 Enough, already! We're off to the fantastic Tapeteria de Borja, just off the Carrer de Caballeros, for jamon serrano con almendras (roasted almonds sprinkled across the top), pimientos de padron, alcachofas (artichokes with garlic), calamares a la plancha (grilled squid), pan (bread) and a delicious bottle of 2009 Ribero del Duero. Clearly a local-ish haunt, because we were the only English-speakers in the place! Then a walk up to see the Torres Quart (the other of the two surviving Old City gates) with a section of the old Roman wall attached. Beautifully lit at night.
Tomorrow, beyond the Ciutat Vella and the Ciudad de las Artes y las Cienas, followed by the Seafront...
copyright Patricia Stefanowicz BArch MArch RIBA AIA PE MW 2011
Posted by Patricia Stefanowicz BSc(Hons) MArch PE MW at 5/27/2011 01:47:00 pm