The annual Election Court Dinner of the Company seems to be the occasion on which the Master spends much of the time allocated to him by the Clerk giving things away. After what was thought to be an excellent meal in the atmospheric surroundings of Armourers' Hall the Master welcomed a number of guests. 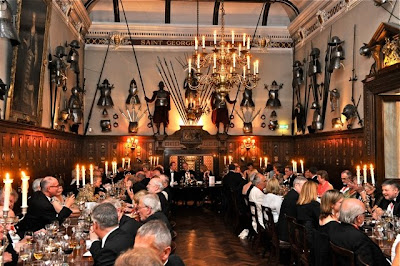 Guests included four fellow Masters - representing the Tylers' and Bricklayers' Company (Julyan Gordon), the Masons' (Richard Woodman-Bailey), the Paviors' (Tom Barton) and the Furniture Makers' (Peter Head) and their ladies. The City was represented by Alderman and Sheriff Elect Fiona Woolf CBE. We were also joined by two helmsmen from the Tower RNLI LIfeboat Station on the Thames -Stuart Morrison and Bill Callaghan, The Secretary of the Architects Benevolent Society - Keith Robinson was present to see the presentation of the Company's Award for the most significant contribution to the ABS in the Course of the year. The plate, decorated by Russell Brown of Hawkins Brown, was won by Populous represented by Ben Vickery. Both were present.
Pictured below is Ben Vickery collecting the ABS Award from the Master 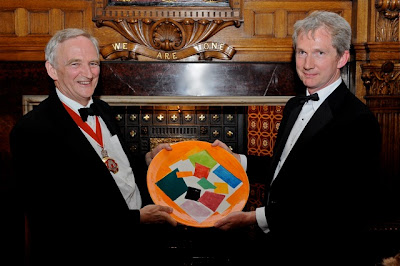 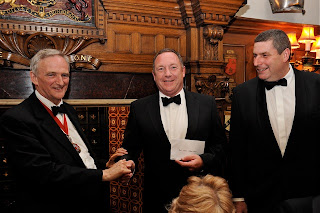 As part of its support for its 'link regiment' the Company has actively supported the appeal for funds by the Tower Pier Lifeboat Station to purchase two new Class E Lifeboats for the Thames.
Pictured left is the Master presenting a cheque to Stuart Morrison and Bill Callaghan 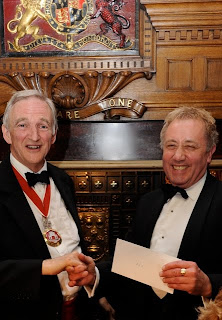 Pictured right - the Master presents a donation to the Secreatry of the Architects Benevolent Society - Keith Robinson.
The other presentation made on the evening was of a cheque to the winner of the Company's Stuart Murphy Travel Award for 2010. This is an award of £2,000 made following receipt of applications from Diploma Students at schools of architecture in London. It is intended to allow the winner to undertake travel in conjunction with a piece of course work.
The winner this year had been announced to the Court earlier in the day as Linda Hagberg who is studying at the Bartlett School.
Linda is pictured below receiving her award from the Master. 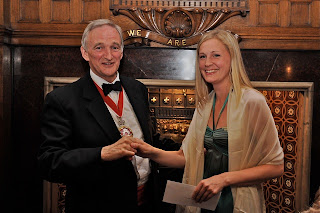 While the occasion had something of an 'end of term'feel about it, there was, for those in need of the CPD points) a serious side to the evening. The Master's principal guest was Dr Simon Thurley - Chief Executive of English Heritage (picture below with the Master) who, in response to the toast to the guests, set out a clear explanation of the challenges facing his department and the means being taken to reslove them. 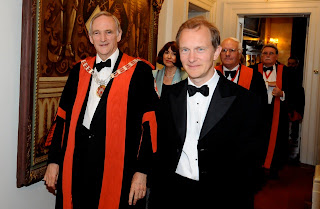 If there is any doubt about the Master's enjoyment of the occasion the photograph below provides the answer. As soon as he was escorted from the Hall at the end of the meal, he made a hasty return to be photographed with a selection of ladies who had all been sat in close proximity to each other. 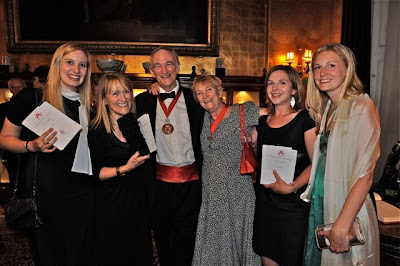