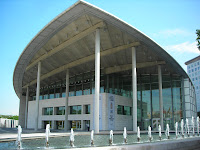 14th May 2011
Our intrepid guide, Malek, then led us onwards and upwards. A must-see is Norman Foster's Palacio de Congresos, a couple of kilometres away in the Benimamet district, an infertile area northwest of the Ciutat Vella.
Foster's design is bold and expressive. But, as we all know, the gods are in the details and this building certainly provides ample evidence of that; ironmongery and glazing impeccably fitted with the stainless fixings also beautifully rendered. 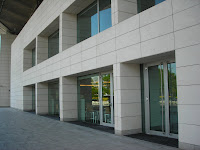 The glass fins to the side of the 'break-out- space are very nicely done, too. And the cooling, gently lapping pools of water add a touch of the sea to the venue. 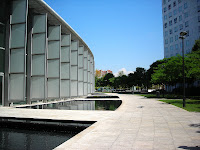 Shame about the surrounding hotels slightly overpowering the centre itself, but, to be fair, they are certainly reflective of the 'plasticity-genre' of Valencia's heritage. I rather liked the beautiful white marble (75mm thick) slabs, which I've been assured were sourced from near the Rioja region in the north of Spain. Perfectly plausible, given the limestone sub-base throughout most of Spain, but these could easily have been Cararra marble. 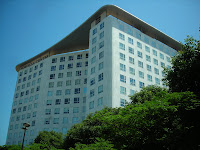 The landscape architecture is also appropriate with plenty of trees and geraniums in evidence around the bases of the buildings and in the surrounding-though 'weenie'- parkspaces.
No question that Valencia is taking its public spaces and parks seriously. On one of the more crowded roundabouts is a spectacular sculpture of the Dama Iberica by emigre-to-New York Manolo Valdes, depicting two heads, all in cobalt blue, large-scale 'trencadis', so completely fitting alongside Valencia's cobalt domes. 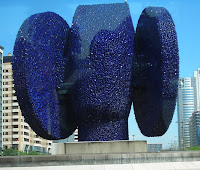 Inter alia Malek showed us a building for a kindergarten, with which he was involved. 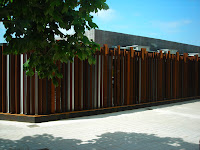 Admittedly the purposefully rusted mild-steel is a little bit unusual, but there is plenty of greenery and we managed to glimpse some colourful walls inside and out.

What would a visit to Valencia be without a view of the football grounds? Located right next to the sculpture pictured above is the new Valencia CF stadium. Started in 2007 by Reid Fenwick and Partners, construction has been halted because the money has stopped flowing. There are hopes that the stadium will not become another carbuncle. Valencia-the 3rd 'biggest' football side in Spain after Barca and Real-need the additional seats, 70K here with private boxes, top-quality catering, integral carparking and irrigation under the natural grass pitch. Perhaps Wembley could take note, rather then replace its grass for an 'umpteenth' time? Mind you, €30 billion makes most of us squeal rather a lot!
We also had to take in a view of the rather decrepit current stadium, too, just to keep our perspective.
Levante (definitely the 'second club of Valencia') didn't get a look-in this time, although we heard tickets for Sunday evening were available? 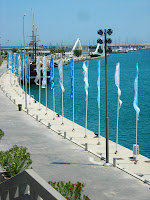 Valencia's Port, only a few kilometres from the city, has long existed, since the time of the Romans at least. But, it wasn't really developed as a 'modern' working port without the sandy beaches until the 19th century. Nonetheless, the Gothic arches of the warehouses are still around, as are the 19th century buildings, like the Clock Building and the (by British standards) late Victorian grand hotels.
Despite being a port, much of the food is a little like Eastbourne...a bit boring, although jamon iberico along the large and very flat beach was acceptable and went just fine with a couple of San Miguel cervezas and a few marinated anchoas.
Far more interesting is some of the recent architecture. Valencia is truly excited about the Veles e Vents by David Chipperfield, and we are, too. Clean lines, bright white concrete and blue glass, it looks as if it might take sails and ship out, in fact. Beautifully detailed and very nicely executed. Symbolic of America's Cup. 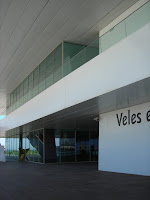 So, who's next on our afternoon agenda? Renzo Piano, of course! 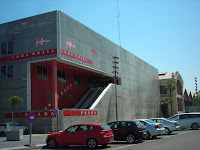 Another little gem by dear Renzo; this for the Italian America's Cup team. Red-and-grey, not precisely the Italian flag, but-hey! With the wonderfully etched and subtle-coloured grey, lemon, rose and beige glass, what's not to love?