Eat your heart out St Paul's

THE CLERK ABROAD
Spiritually refreshed by the above mentioned Carol Service and a subsequent one for his other Company, the Clerk headed for the United States for the Christmas break. Family duties and pleasures awaited. The only thing unusual about this was that it failed to snow while he was there.
One of the features of these trips Stateside is the opportunity to take a closer look at an American city. This time it was the turn of Columbus – a city we have flown into and out of but seldom stopped to inspect. It is, like so many mid western cities, something of a mixed bag. It is also, it seems, a very livable place boasting theatres, museums, galleries etc. Of particular interest was the Columbus Museum of Art which was featuring An Exhibition of the Works of Caravaggio. Sadly, there was only one (suitably impressive) work by the Master  with a selection of other paintings by various of his friends and students showing how he had influenced a generation or two of artists. 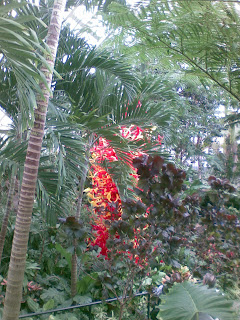 Also of interest was the Franklin Gardens Conservatory. The original part was, we were told, designed by Daniel Burnham fresh from his triumphs in Chicago with the World’s Fair. It was hard to see where this fitted into the overall complex but the whole made for a pleasant visit while we waited for our home bound flight A particular feature was a substantial collection of the works of the American glasssmith Dale Chihuly which were scattered through the various greenhouses. It was this collection which led to a similar (though in our case temporary) exhibition  at Kew Gardens a couple of years ago. 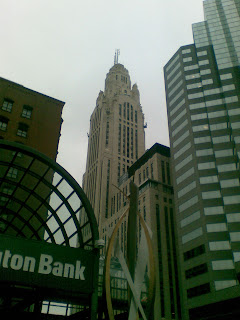 The two photographs above are, firstly, of a sculpture in downtown Columbus which is a memorial to the founder of a bank (about as copious as statues of architects). I offer this not for this fact alone but also to show the splendid art deco skyscraper which dominates the cityscape hereabouts. The building is shown more clearly on the right - it is the Le Veque Tower designed by C Howard Crane in 1927 and topping out at a height designed to be taller than the Washington Monument in the nation's capital - a feat it achieved by 2mm!. While I was photographing it, one of the locals came up and asked me why architects didn’t do that sort of thing any longer. Time did not permit either he or I to continue the conversation. 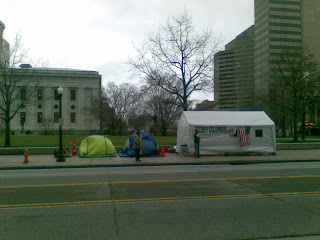 The photographs above show the splendid Greek Revival State House on Capitol Square built between 1839 and 1861. It has survived unscathed despite any number of subsequent attempts to enlarge and alter it.
Of particular interest (and hence the headline above) was the Occupy Columbus Camp on the footpath. I am sure that the locals think it is a disgrace but they don’t know how lucky they are!
Posted by The Clerk at 1/20/2012 05:25:00 pm