Mervyn, the Master's travels and travails

February wasn’t just the MILO Lecture, but it was comparatively lightweight: a relief as I had back problems during most of the month, and had to resort to a walking stick, ’borrowed’ from The Lister Hospital in Stevenage when I suffered a severe sprained ankle many moons ago.  I nearly left it on the coat rack on WED February 6 when I attended the Sherriff’s and Recorders Fund Concert, held at St Vedast, Foster Lane a lesser-known and modest Wren Church of 1695-1701.  The programme was based on London in words and music. The musical side of this pleasant anthology was provided by members of the Choir, and concluded with Noel Coward’s London Pride, his secular hymn to the spirit of the Blitz and ‘London can take it’: much of Foster Lane was destroyed and proud Goldsmiths’ Hall was gutted.  There were also two offbeat numbers- Tell me the truth about love, one of Britten’s cabaret songs to words by Auden; and The bells of London (Oranges and Lemon etc.) from Walton’s Songs for the Lord Mayor’s Table, which was commissioned by The Goldsmiths’ Company, composed in 1962 and premiered by Elizabeth Schwarzkopf and Gerald Moore in the newly restored Goldsmiths’ Hall. On MON February 18 I was invited to attend the launch of the Birmingham Personal Support Unit at the Birmingham Courts (better known to me as Lewis’s Department Store) in the presence of the Lord Chief Justice. Gary is sitting in Birmingham this term but he wasn’t there. Ann and I enjoyed this, and returned to Harborne for an Italian supper at Café Zizzi.  It was a relaxed occasion which prefaced a public inquiry in Westminster over the next two and a half days.

Ann also attended my last event in February, a real blockbuster, on THU February 28, the World Traders ‘Tacitus’ Lecture, which fills the 700 seats of Guildhall to capacity. We’d made a day of it, with a leisurely lunch at Searcy’s brasserie at St Pancras, a  stop at Lipman’s in Holborn to purchase a new tail coat (much needed as the 1988 Charity shop one no longer fits!), then a gentle pither round the Guildhall Art Gallery, and virtually first in the hall. Soon a coterie of Masters gathered around us.  The lecture Industry and the City – Revitalising the Economy was given by Sir Richard Lambert, Senior Independent Adviser at Deutsche Bank addressing the challenge of growing the economy in straightened times (a perpetual leitmotif from economists, politicians and pundits).  Not unexpectedly Sir Richard was committed to a European perspective, but also touched on the sleepwalking into the demise of British manufacturing industry, and the lack of practical fitness for purpose in education.  It was sobering to wake up next day to hear the near triumph of little England at the Eastleigh by-election, held the day of the lecture.  At the crowded reception afterwards Ann made great effort to find (and presumably buttonhole) her MP, Gisela Stewart, but was unsuccessful.


Into Mad March with an onrush of dreadful weather which deteriorated steadily through the first week.  On MON March 4 at 18.30 it was the City of London Guide Lecturers’ Association Lecture at the Dutch Church in Austin Friars. Their 10th Annual Derek Melluish Memorial Lecture was given by Richard General Lord Dannatt, Constable of the Tower of London, who as head of armed services had been summarily ‘sent to the Tower’ by Gordon Brown who, it is said, blocked further service as Chief of General Staff, reputedly as a result of criticism of Defence Policy over the War in Afghanistan (he had also had a brush with Blair).  The lecture drew on Dannatt’s hindsight perspective on the latter part of his military career as well as his new day job, held since 2009. Frankly I would have preferred more about the role of the Constable, although it did arise in the short Q & A session before the reception.


TUE March 5  saw the Builders Merchants Annual City and Awards Luncheon, at Ironmongers’ Hall, 12.30 for 1.00pm.  The welcome by Master Andrew Day was cordial and I thoroughly enjoyed this event.  However, the timing overran and I had to make a not very discreet exit before the Award presentation was completed to rush to a meeting at the RIBA. This had been convened to discuss Richard Brindley’s paper on Championing London’s Global Architecture Trading Hub, which postulated a new role for WCCA with RIBA input.  There had been welcome developments since it was taken to the January Court and this would be ongoing to the April Accounts Court.  Once again, the pressure of moving quickly between two different commitments several miles apart was not conducive to effective participation at the latter.


The weather forecast for FRI March 8: Letchworth Garden City Day was ‘wet and windy’: in addition poor visibility veiled the impact of the First Garden City, but happily did not dim the enthusiasm of the 31 participants who arrived at the Spirella factory ballroom for the morning presentation by Letchworth Garden City Heritage Foundation, followed after an early buffet lunch, by an afternoon tour of architectural highlights including two superb houses which evoked ‘the spirit of the place’.  Dropping in (out of the rain) to The First Garden City Heritage Museum, their exhaustive display of Spirella corsets and memorabilia revealed the amazing range of ‘figure modelling’ garments many of our mothers and grandmothers ordered in confidence from the local network of Spirella ladies, and were made to measure in ‘Castle Corset’.  This event was a slice of my professional, academic and literary life involving the Garden City movement, embarked upon in 1974 and continuing in an international context.  The calling notices and briefing notes reproduced below 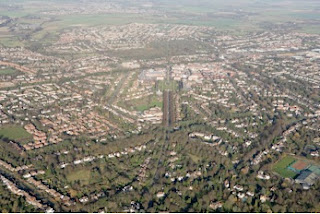 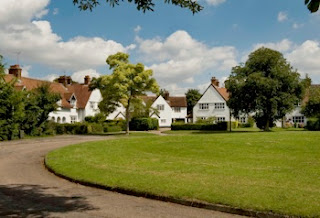 
Garden Cities are back on the government's planning agenda.  I have been involved with their management and conservation for almost 40 years.  I have published several books on the subject: the latest Introducing English Garden Cities appeared in 2010 under the English Heritage imprint.  In liaison with the Letchworth Garden City Heritage Foundation I am organising a visit to the First Garden City, established in 1903 on the basis of Ebenezer Howard's book, Tomorrow: A peaceful Path to Real Reform published in 1898.  Building a Utopian community on the green fields of Hertfordshire was a bold strategy for First Garden City Ltd.  However the Master Plan by Barry Parker and Raymond Unwin and the enlightened cottage housing set standards for community planning during the 20th century and are still relevant today.  Howard's 'joyous union of town and country' included a spacious town centre and an industrial estate, reflecting an arts and crafts architectural image, set in an agricultural green belt, which anticipated its statutory counterpart by 50 years.

A unique feature about Letchworth is the requirement that the added value created by its development and management should be returned to the community, rather than distributed to shareholders.  The Heritage Foundation is a registered charity which has ploughed resources into regeneration, including the local cinema, and awards grants to community organisations.  It is independent of North Hertfordshire District Council, which is the planning authority.  Most development requires landlord consent from the Foundation in addition to statutory planning permission from NHDC.  The Letchworth Conservation Area covers the town centre, Howard Park, Broadway, Norton Common and most of the early residential areas.  Many of the most characteristic early Garden City buildings were listed in 1979, the first predominantly 20th century statutory list.  Much of the groundwork for the conservation of Letchworth was put in place by The Master, when he was Principal Conservation Officer at North Hertfordshire District Council in 1974-87.


Letchworth is easily accessible by rail from King's Cross or Cambridge, and is just off the A1 (M) junction 9.  We will meet at the iconic II* listed Spirella building (a few yards from the station) at 10.00 for 10.30 for coffee and a briefing by the Heritage Foundation, the ground landlord.  A bus tour will include stops at the Garden City Heritage Museum and the outstanding regeneration of Howard Park Gardens, the new sustainable housing at Hartington Place and an early Arts and Crafts private house.  Lunch will be provided by the Foundation.  The day will end about 4.00 pm.

10.15-10.45am
Arrival at Spirella Building for Coffee. The Spirella Building was designed by the Letchworth architect, Cecil Hignett, for the American firm manufacturing and marketing made-to-measure corsets, stiffened by a spiral wound spring. The building (constructed in three phases 1912-20) is a pioneer of concrete framing, with generous glazing in the workshop wings and flat roofs, which were used as sun decks by the employees.  The ballroom, where our meeting will be held, hosted callisthenic dancing for the employees as well as civic balls. Corset manufacture ceased in the 1970s, and most of the factory was subdivided into myriad small industrial units, and deteriorated, despite being listed Grade II*.  It was refurbished as high-tech offices by the Heritage Foundation and was re-opened by Prince Charles in 1999. 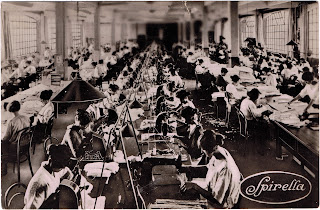 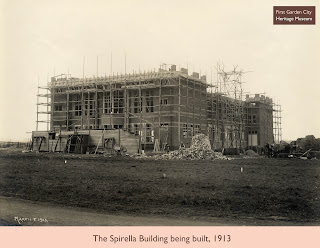 4.15 pm
Return to Spirella for Tea and departure