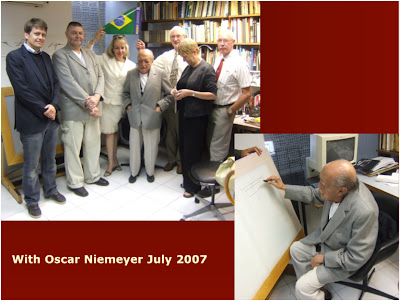 Oscar Niemeyer (1907-2012) has just died, a few days before what would have been his 105th birthday. Along with a few other members of the Company, I was privileged to visit his Rio studio, overlooking Copacabana beach, where he sketched projects, which were then worked up in a separate office. He reminisced about his life’s work and uneasy working relationship with Le Corbusier, which began with the Ministry of Education in Rio in 1937. Their stormy collaboration on the United Nations Building in New York gave rise to it being sorted out by Harrison and Abramovitz, whom Corb dismissed as ‘gangsters’. Famously Corb remarked to Oscar ‘OK- you do it the Baroque Way’, a reference to the sweeping curved forms which dominated his work from the 1940s, begining with the public buildings at Pampulha Garden Suburb outside Belo Horizonte, state capital of Minas Gerais, run by Juscelino Kubitschek. As President of Brazil, JK appointed Niemeyer to work with Lucio Costa in planning and building the new national capital, Brasilia, and getting a critical mass completed during the President’s single term 1955-60 so that there could be no going back. A remarkable achievement, the most iconic building is probably the Cathedral, formed of inclined curved precast concrete ribs, creating a corona in silhouette. And then there are the domes, featured in the Parliament building, and repeated ad infinitum in projects over the years, with distinctly erotic overtones – the curves, whether they be of the hills surrounding Rio, the sinuous canopies that linked his cultural buildings at Sao Paulo or the female body – were the fundamental leitmotivs of creativity.

Famously an outspoken man of the left, he was virtually exiled to Europe during the late 1960s, and designed the headquarters of the French Communist Party in Pars, and commercial and cultural buildings in France and Italy, before returning to his homeland under an amnesty in 1979. A close personal friend of Fidel Castro, he was commissioned to design a Monument to Anti- Americanism for Havana. He told us about this, sketching a horned devil’s head spouting flames, while muttering ‘Bush merde’ sotto voce – no translation necessary. I suppose that it won’t be built, although there will doubtless be ongoing projects taken to completion, as occurred with distinctly variable results after Frank Lloyd Wright’s death in 1959. The cultural centre at Aviles, Spain, element of which he sketched during our visit was completed in 2011, one of many ‘in progress’ projects we were shown in the downtown office.

The links to the heroic ages of modernism are fast being broken. Oscar Niemeyer was one of the last and most prominent. Brasilia was recently declared as a World Heritage City by UNESCO – I wonder what Oscar made of this! It certainly remains one of the most rigorous realisations of the Ville Radieuse model, with its inherent strengths and weaknesses. Fifties sculptural concrete architecture is still controversial, but on this scale cannot be ignored, and Niemeyer was one of its greatest begetters. 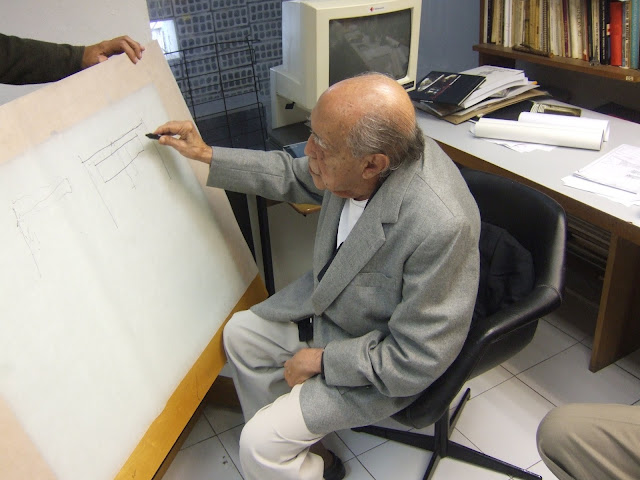